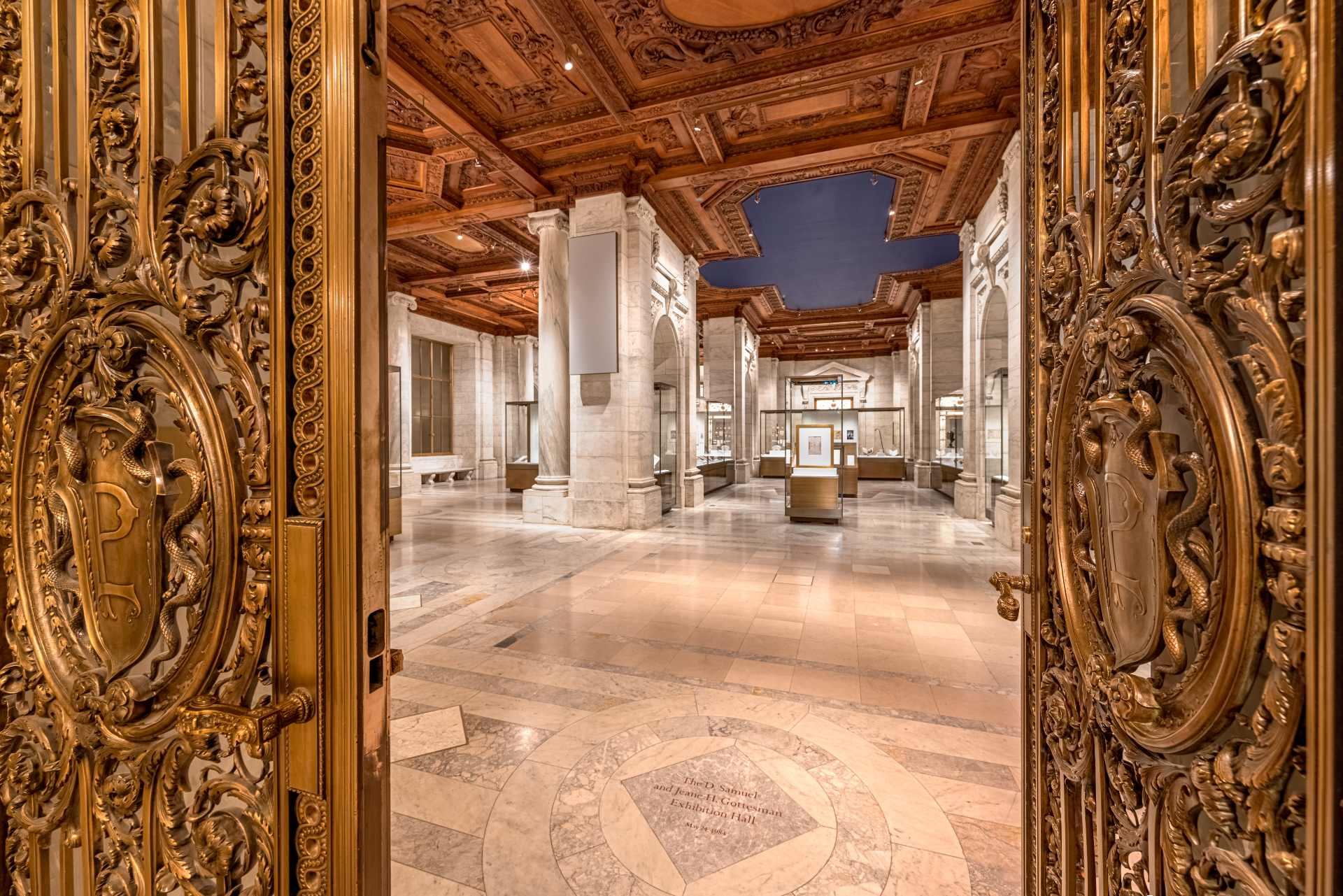 The exhibition, which will open to the public on Friday, September 24th, spans 4,000 years of history and includes a wide range of historically significant pieces, including the only surviving letter from Christopher Columbus addressing the court of King Ferdinand heralded his “discovery” of America and the first Gutenberg Bible brought to America.

We visited the Stunning Collection this week to find the top 10 must-see NYPL Treasures exhibit. So if you go there you can see them for yourself:

1. Thomas Jefferson’s handwritten copy of the Declaration of Independence

Only six handwritten versions of the Declaration of Independence have survived in the hands of Thomas Jefferson. Jefferson made this copy for a friend shortly after ratifying the Declaration on July 4, 1776, proclaiming to the world the political separation of the American colonies from Great Britain. He underlined words that he finally took out of the final document. Among the disapproved passages presented here: a passionate condemnation of African furniture slavery and the slave trade for which Jefferson King George III. blames. Jefferson’s anti-slavery thoughts were not insincere, but how he managed to keep them as an enslaver remains a mystery.

2. Draft manuscript fragment from A defense of women’s rights

Mary Wollstonecraft, mother of feminism, called for equality for women based on what they have in common with men. With an early edition and a design fragment in her handwriting, the only surviving version, she confronts both the women who indulge in extravagant fashion and the men who ridicule it.

3. The soft toys that belonged to the real Christopher Robin and inspired the Winnie the Pooh stories

The original stuffed animals that inspired the Winnie the Pooh stories are right here in NYC. They belonged to Christopher Robin Milne, who bought a teddy bear from Harrods department store in London in 1921, went to the United States in 1947 and was kept by Milne’s American publisher EP Dutton until 1987 when they were donated to the library.

4. Maquette of “Lift Every Voice and Sing (The Harp)” by Augusta Savage

This incredible plaster sculpture was designed by Augusta Savage, a key figure in the Harlem Renaissance, for the 1939 World’s Fair. Her work honored the composer, activist, lawyer and colleague of Floridian James Weldon Johnson: “I chose the Negro national anthem as my subject,” wrote Savage. “It’s a poem by the late James Weldon Johnson, set to music by his brother John Rosamond Johnson.” The sculpture was one of the most popular at the fair, but it was destroyed because they couldn’t afford to cast it es in bronze These and other reproductions were made and sold as souvenirs.

5. The set model of In the heights

The popular musical by Lin-Manuel Miranda and Quiara Alegría Hudes is represented by Anna Louizos’ set design for the original off-Broadway production, which features a dynamic urban street landscape with details taken from her visits with Miranda in his neighborhood, including the George Washington Bridge, are inspired.

5. The triumph of Maximilian (Triumphal Arch) by Albrecht Dürer

Albrecht Dürer’s Triumphal arch, commissioned by Emperor Maximilian, is one of the greatest prints ever produced. It’s made out of 200 individual prints and requested the combined work of Dürer and an assistant workshop for more than two years. The library has two copies, including a rare but incomplete first edition. The one shown here is complete and belongs to the third and final edition.

You can see the actual desk, chair, and light that Dickens used while writing Hard times (1854) and Great expectations (1860-1861). He also wrote some of his more than 15,000 letters on this writing runway. The chair was in Dickens’ office at. used Household words, the weekly magazine he published in the 1850s, but was later moved to his home. This ensemble, including the small desk calendar, was all from Gad’s Hill Place, Dickens’ primary residence for the last decade of his life.

This beautiful hand-dyed silk from 1925 was probably worn in a dance set for Claude DeBussy’s “La Mer” by the dancer and entrepreneur Loie Fuller, who transformed it under colored light. Fuller’s interpretation involved a flight of stairs and yards of silk, which made the entire stage move like ocean waves. Known for manipulating fabrics in swirling, undulating patterns, she helped define the modernist aesthetic that inspired artists from sculptor Auguste Rodin to poet WB Yeats to mother of modern dance Isadora Duncan.

8. A page from a draft by the novel James Baldwin

This circa 1960 speech by James Baldwin outlines some of his thoughts on the characteristics of the novel as a form and the challenges facing the American writer, but especially black writers. The last page shows Baldwin’s take on the promise the novel holds for African American literature when black writers – like Richard Wright, Chester Himes and Ralph Ellison – write how they see themselves: “a new sense of our identity.”

Take a close look at this umbrella. Do you remember someone It belonged to the author of Mary Poppins-Pamela Lyndon (PL) Travers. The American editor presented the umbrella to the New York Public Library in May 1972, and at the same time Travers himself donated a small collection of artifacts associated with her popular picture book series.

You can see the current leather and brass briefcase from Malcolm X, who was known to have a busy schedule, meeting with activists, religious and community leaders, students, scholars and everyday people around the world and on the sidewalks and in shops of Harlem. Much of the Malcolm X Collection documents the substance of these many meetings, conferences and public presentations and gives an insight into the charism that drew so many people to him. However, the collection only includes a handful of Malcolm X’s personal items. This briefcase is one of those rare artifacts and testament to the tireless work of Malcolm X.

It was admittedly difficult to put together a list of just 10 amazing items from this exhibition as there are literally hundreds of items that are so old and so important. Get your tickets in good time at nypl.org/treasures before you set off.

The exhibition is expected to be a dynamic experience – new items will be removed and added over time. No wonder, when you consider how many treasures the New York Public Library has likely acquired over its 126-year history. The new exhibit was supported by a $ 12.5 million donation from philanthropist Dr. Leonard Polonsky CBE and the Polonsky Foundation and curated by a team of academic library staff led by Declan Kiely, the library’s director of special collections and exhibitions.

“To move forward and make real and substantial progress as a society, we need to understand what was ahead of us,” said Anthony W. Marx, president of the New York Public Library. “We need to learn the stories that contributed to our collective history, the awesome, the heartbreaking, the exciting, the spectacular.”