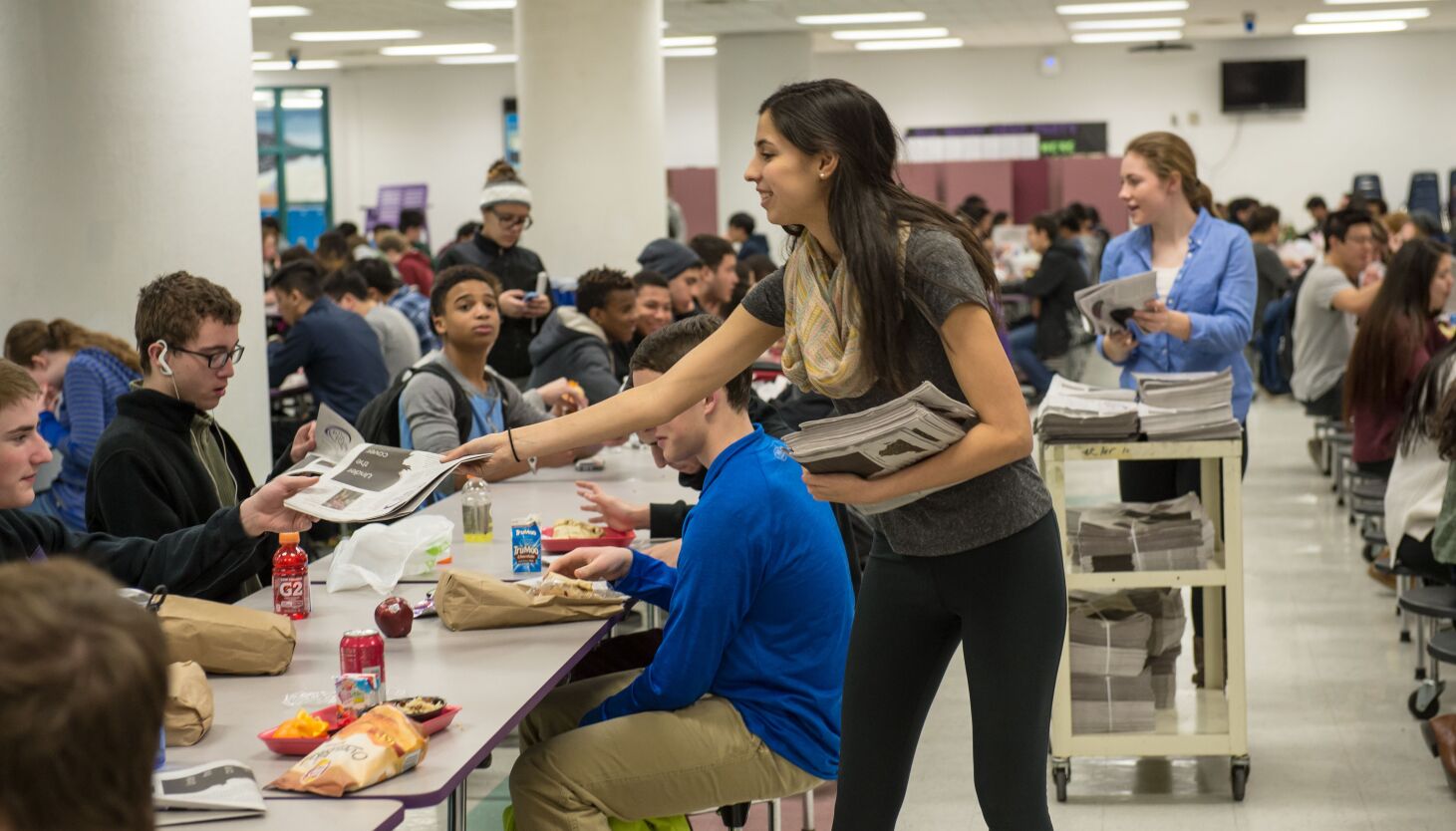 Emely Ou Feng dreams of one day becoming an investigative journalist. But the 16-year-old hasn’t had many opportunities to pursue that goal at school for one simple reason: her Brooklyn campus doesn’t have a student newspaper.

“I kind of knew from my freshman year that I wanted to be a journalist,” said Emely, a junior at John Dewey High School. “I should be supported by my school, you know, to pursue my passion.”

Instead, Emely has found outside programs and internships to hone her craft, although her school recently started offering a journalism elective and she jumped at the chance to enroll.

Emely is hardly alone. About 73% of the city’s high schools don’t have student newspapers or websites, according to a new study by Geanne Belton, journalism professor and director of the high school journalism program at Baruch College, part of the City University of New York.

“I think it’s a great loss for a school and for students if there isn’t a newspaper,” Belton said, “especially now that news literacy education is so important.”

Proponents of student journalism argue that news collection programs are essential because they provide opportunities to develop writing skills, build community, hold school leaders accountable, and build a more racially and socioeconomically representative pipeline of professional journalists. Some of the city’s high schools already boast powerful newspapers that repeatedly break the news and push mainstream news outlets to scramble to adjust their reporting.

But it is up to individual schools to operate and fund student intelligence services, and many schools face competing demands ranging from helping students catch up academically to offering more STEM-related activities. Newspapers can be hard work, especially when student interest falters or staff supporting them leave.

Between 2021 and 2022, Belton and a team of research assistants surveyed almost every public high school if they had intelligence services for students. Although historical data is limited, there is some evidence that student newspapers have shrunk over the past 15 years, although by exactly how much is not clear. Belton’s team also found large disparities in newspaper access across the city by race, geography and poverty status.

All of the technical schools, which are among the pickiest high schools in the city, have student newspapers. (The study excludes charter schools and certain alternative programs, including District 75, which enrolls students with more severe disabilities.)

Jose Santana, a junior at Dr. Richard Izquierdo Health & Science Charter School of the Bronx said he wished the school had a news organization, in part to report on extracurricular activities besides sports. During his freshman year, the school started a radio club, but he said it was advertised mostly via email and soon fizzled out in part due to a lack of interest.

A student news organization could “help students speak out for things that are happening,” Jose said. “It would definitely make sense to encourage clubs.” Jose has also pursued journalism opportunities off campus, working as an intern on a podcast called “Miseducation,” which focuses on educational inequality.

There are growing efforts to increase the number of student intelligence services. As part of their survey, Belton asked high schools that don’t have student newspapers if they would be interested in starting one. She started a training program for educators who had expressed interest, covering everything from the basics of writing a news story to the right website platform. And thanks to outside funding, she was able to hand out $1,000 in honoraria to teachers to help them get started.

“We’re really trying to jump-start newspapers,” Belton said, adding that the goal is to launch 25 new student newspapers by the end of 2023. (Belton’s survey and training program was funded by the Google News Initiative and The Charles H. Revson Foundation. Chalkbeat is also funded by Revson.)

However, training is only the first step. “When some schools run a newspaper club, they compete with a lot of other clubs and the students’ time,” Belton said. “You have to get students interested when a lot of students don’t know what a school newspaper is.”

Bronx teacher David Fulco knows how tedious the process is. After attending Belton’s training earlier this year, with the support of the principals, he recruited about 17 juniors to start a news organization. Armed with much practical advice from Belton and having worked as a journalist earlier in his career, he figured they would have no trouble publishing at least twenty stories by the end of the school year. They released closer to five.

“I have worked with newspapers before. I worked in an editorial office. It was tremendously difficult,” said Fulco, who teaches English at the Laboratory School of Finance and Technology. “It’s a brand new way of writing that you’re being asked to do. It requires an overhaul that they hate. It requires editing that is so difficult.” He also found that he had to prepare detailed lessons that took time to create.

Fulco is optimistic that the school newspaper will catch on and grow. “It’s gratifying to see your work, but it’s not as instantaneous as the gratification they can get through their social media,” he said. “They see a newspaper as a vehicle for change, even more so than a student council.”

Denisse Merino, a senior at Manhattan Leadership and Public Service High School, has seen the impact of her own journalism. Her school started a news organization for students after attending Belton’s training. Last month, Denisse wrote a story criticizing the school administration for not planning field trips specifically geared towards the high school, including field trips to museums or college visits.

The school management initially “rejected” the idea, the article says. But after the story played, Principal Philip Santos met with Denisse and two other students and agreed to monthly trips – including a trip to the cinema later that month.

Santos said the article reminded him that high school had disrupted much of her high school experience with the pandemic, which struck during her freshman year and limited opportunities for field trips. “The newspaper and her article and talking to her friends just did it,” Santos said. “I’m very proud of her.”

For her part, Denisse was “really excited and grateful” for the story’s impact. “We could be heard,” she wrote in one text.

Other efforts to expand access to student journalism are also beginning to bubble up. The Bell, an organization that provides training and support for student journalists, is leading a Youth Journalism Coalition made up of students, lawyers and professional news outlets (including Chalkbeat) to begin developing solutions.

“New York City is the media capital of the world, but we have youth media deserts all over the city and it doesn’t have to be that way,” said Taylor McGraw, managing director of The Bell. “We’re going to need investment from the big players in this ecosystem — the DOE, the CUNY system, and the media.”

Students have begun to press School Chancellor David Banks whether he could support more aggressive efforts to expand student journalism, especially as he has emphasized career-oriented educational options.

At a press conference with student reporters, a student at Susan Wagner High School on Staten Island Banks asked if the education department planned to increase access to journalism opportunities for students, especially given the wide disparity in which students have access to them.

Banks acknowledged that the issue wasn’t “top of mind,” but left the door open to change.

“Anything that raises the students’ voices is important to me,” he said.

McFly’s Tom Fletcher looks back: “People were throwing things at us on the…