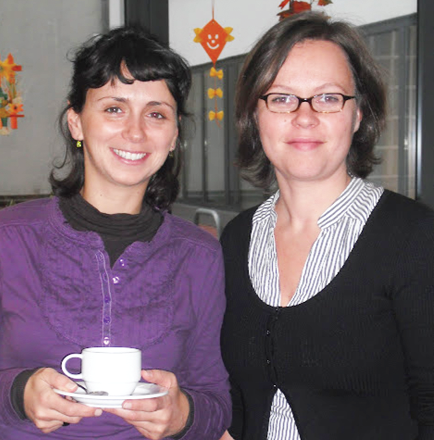 Andi and I were met on arrival at the guest house by two charming ladies who we later learned were also course (seminar) assistants known as Antonella Fiore and Susan Sharaf.

The very meticulous ladies made us feel very welcome and showed us to our rooms – Antonella looked after Andi while Susan looked after me, explaining the facilities available to us and giving us stuff we need in Berlin would.

Hey, and I have to say the apartments in the guesthouse were just cool, with a kitchenette, washroom, large closet, TV, bedside radio, two desks and all that, but the less said about the TV the better.

Only one of the 50+ channels suited me and that was the CNN Channel – all the others were entirely German channels and my German or German wasn’t that good; You know.

Long wait for my luggage

Egg! So I really arrived in abrokyire that far from home? I did a monologue. hmm! Yes, my new surroundings showed that I had traveled so many miles from Ghana and Africa.

So I should take it easy and wait for the next action which was to receive my luggage which I couldn’t find on arrival in Berlin and I suspected it was due to the delay of a connecting flight from Frankfurt to Berlin .

In fact, I would not have left the airport without my luggage, which I thought had preceded me to Berlin, if Sabrina, who greeted me at Tegel Airport, had not assured me that she would take it from there and ask me to to go and go rest and relax after my long flight.

But hey, that was another chapter I wouldn’t soon forget. And that was because I waited a long time until it finally arrived around 6:30pm. German time.

You can understand my apprehension when, six hours after arriving, I still hadn’t seen my luggage that I had packed from home. In those nervous moments I asked myself so many questions and feared the worst.

However, I am grateful to Sabrina who kept communicating with me asking for a description of my suitcase, at the end of which she assured me that the luggage would be with me by mid-afternoon.

I later understood the delay when I received a call on my Germany cell phone (part of the package upon arrival and check in at the guest house which will be returned at the end of the course) and went downstairs to get my stuff.

It looked like I was just one of several people who had their luggage mailed and I let out a deep sigh of relief when I saw it with the suitcase. But then… was everything intact?

It seemed so, but it had obviously been tampered with – the main compartment, locked with a combination of numbers, had been opened – how I didn’t know.

The authorities may have checked that the owner of the bag did not have any contraband such as drugs.

How do I know? My little gari was punctured while my cocoa butter pomade looked like it had been stirred. In any case, I am grateful that nothing was missing from my articles.

hmm! I didn’t tell you that. While I was still wondering what had happened to my luggage, Susan and Antonella – the charming ladies who checked us in at the guest house – were back at 2pm (1pm in Ghana) to introduce us to the neighborhood. This introduction meant that we had to take the bus from where we lived to the next central point – Hermannstrasse (pronounced Hermannstrasser).

It was now very cold from the day’s showers and this day, we are told, was exceptionally cold – what a welcome. While I was glad I had the opportunity to meet most of the attendees who also traveled, it was very inconvenient for me because I was only wearing a polo shirt and jacket, which until that moment I thought was very heavy – come and look at the Ghanaian wey dey trembling for Kwesi Broni abrokyire cold inside but I’m not fit Show – show say I’m a man from Africa – Mamei!

I had to say some special prayers quickly so we could get back to the guesthouse quickly, and thank god we did that in time before I started shaking like a leaf on a tree during harmattan.