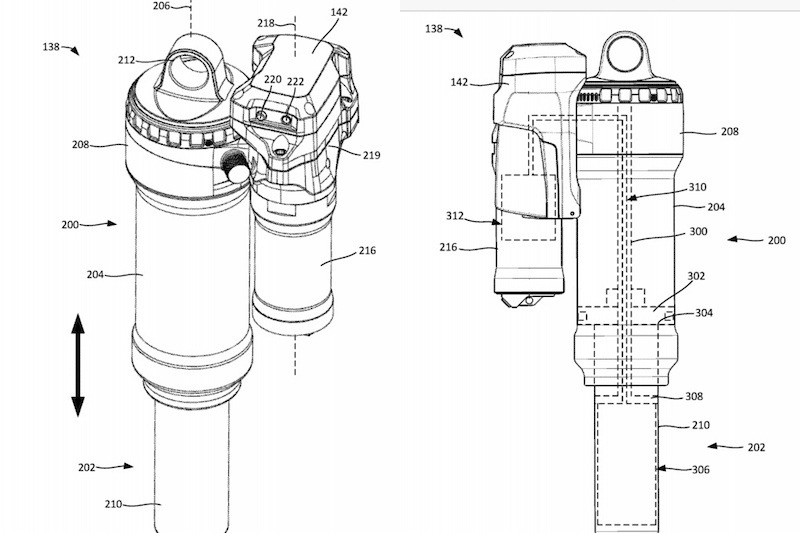 SRAM has published a patent application for electronic and wireless suspension control that could be used with sensors to automatically adjust the compression damping of the rear shock. The patent was filed in December 2019 and published in June of this year.

Of course, this is not the first system that promises stepless and automatic adjustment of the suspension of a bike.Fox Live Valve has been around since 2018 and RockShox showed theirs together with Lapierre and Ghost ei system as early as 2012, but that is no longer available. So what does it do differently?

Both Live Valve and ei offer noticeable advantages, but also disadvantages. Neither of these has really caught on.

Both Fox Live Valve and ei use cables to connect the various sensors (accelerometer and, in the case of ei, a pedal sensor) to the shock via a separate battery / controller mounted on the frame. This meant that it was not compatible with many frames in either case. SRAM’s new system appears to be a self-contained unit (battery and everything) that sits on top of the shock. That said, it should be possible to mount it on almost any frame.

It has at least three settings

Rather than using an electromagnet to toggle the compression circuits in the damper and fork between fully open and fully like Fox’s Live Valve, SRAM’s system uses a rotating electric motor and gear system to turn a threaded piston which then rotates inward. or moved out of the head valve of the shock absorber. The patent technique shows three settings for the piston. Open, where oil can flow past the piston and through an opening below; partially closed where the piston closes the opening but allows oil to flow through the parallel high speed washers, and closed where oil cannot flow through either of these paths and is forced to go through the overhead lock washers. How the flow of oil is regulated is not unusual. It’s how the damper / controller switches between the three modes that are different.

I say “at least three” modes because of it Makes be possible to fine-tune the position of the piston in the open mode without fully closing the port to smoothly adjust the damping at low speed. The patent document doesn’t address this so this is pure speculation, but this could allow the shock absorber to be fine-tuned to the respective terrain when descending, either through automatic sensors and an algorithm or through a controller mounted on the handlebar. For example, you can imagine the system automatically tightening the compression with a few clicks of a gentle flow trail, or when it detects that you’ve been in the air for a long time, a big landing is imminent.

However, there are several reasons to doubt this “sliding scale” theory. Most importantly, the patent makes no explicit mention of a graduated scale and the power required to periodically adjust the valve position for a small battery may be too high if you want reasonable battery life. So while the sliding scale adjustability might be possible with this screw-in piston, I think it is more likely that the system should switch between three different compression settings.

It can use both driver and terrain input to determine settings

The document is pretty detailed about the system’s output (how it can control compression damping), but it is less clear what the system’s inputs would be.

It mentions a handlebar mounted remote that could manually control the shock absorber. Anyone who’s ever ridden or even looked at a Scott TwinLoc bike will appreciate the benefit of a wireless lockout system over current offerings, but that’s not exactly groundbreaking. The patent refers to the automatic adjustment of the suspension, but remains vague: “The bike can have one or more sensors to measure and / or record various parameters … e.g. speed of the bike, pitch angle of the bike, Crank assembly torque etc. ”

While Fox’s Live Valve picks up input from accelerometers in the fork, swingarm, and frame and opens the shock absorbers when vibrations are detected, the SRAM system will likely use speed, incline, and pedal sensors as inputs that feed an algorithm to make decisions what to do with the damper. There may be other inputs, possibly including an accelerometer on the fork that can detect bumps and open the shock absorber before that bump reaches the rear wheel. After all, that’s how the ei system worked.

The patent does not cover a controller for the cradle, but a picture shows a wireless icon on the top of the cradle, so this could indicate an input sensor / transmitter on the cradle (e.g. an accelerometer) that is connected to the shock regulator could communicate. The same drawing shows two wireless symbols on the stem, which can be a central computer and / or a manual remote switch.

The term “crank assembly torque” is particularly interesting. Ei used a simple magnetic cadence sensor in the bottom bracket to detect when the rider was pedaling and opened the compression damping when the pedaling stopped. A torque sensor can do the same job, but with a faster response time, making it more difficult to intercept the system.

I found it too this patent for a crank sensor, also submitted by SRAM in 2019 and published in 2021. It’s not a torque sensor, but it’s supposed to fit into a crankshaft and “measure angular velocity or position”. [of the crank] in less than one revolution of the crankshaft “In other words, it would detect pedaling faster than a magnet in the bottom bracket that only senses pedaling once per revolution. Here’s the really juicy bit:” The device can also include a wireless transmitter around communicate with another component, e.g. B. a landing gear controller. ”

So maybe this crank sensor is one of many possible inputs for the chassis controller. It can work like an updated version of ei, with faster pedal detection, three (or possibly more) compression modes, and no wires. It could be that SRAM is targeting a complete wireless ecosystem built on top of its existing wireless AXS gearbox and dropper post. Perhaps the wireless shock controller could be used with a range of detectors (cadence / torque, speed, accelerometer, handlebar-mounted remotes, etc.) and configured to respond to several different input sensors at the same time, adapting the shock to the terrain and / or what the driver is doing.

To be clear, I don’t know anything about this product other than what I can glean from the patents linked in this article. I don’t know if the product will be on the market tomorrow, in a year, or never. And of course, a lot of the speculation I’ve made about how it might work could be far off.

With that in mind, feel free to take a look at the patent document for yourself (I’d recommend a strong coffee first) and let us know in the comments how you think it might work.

Editor’s note: There have been allegations of journalistic inappropriateness relating to this article by Wheel based. Dan at Wheel Based has written an article about this patent before us and he thinks we took inspiration and information from him without credit. We didn’t, and I contacted him personally to try to get to the same page and offered to show him some information on how we got our information. We acted in good faith but I should apologize for our salty setback in the comments. I understand how it could look like we’re just ripping the little guy off, but it’s really disappointing to see people attack Seb’s hard work when it doesn’t.

We didn’t come across this patent through the Wheel Based Story. We have many sources. I have known and followed this information about this shock since 2019, and we are regularly looking for new patents. In this case, investigate whether this dropper post on Nino’s bike is a new RockShox product (before this patent went public) brought me some information about this project that led to this patent. We’ve been writing patent-based articles since 2018 (probably earlier, but that’s the earliest that comes to mind) and it’s a common practice in cycling media. Regardless of being the first, there is no exclusivity on a subject; We don’t get angry when other media outlets cover a bike we first discovered and reported about, and we don’t get angry if Wheel Based ever talks about the pedal sensor patent, which we are the first to assess in this article .

We always enjoy working with people and our policy is to always give credit when our reporting comes from elsewhere. Whether Vital or Bike Mag / Beta or bicycle dealer or user here, we are not unsure when it comes to loans. We have communicated with Wheel Based in the past, but not for a long time. Dan is a smart guy who does interesting things, and while I disagree with some of his assessments, he was quicker than us to check multiple patents. All power to him – I need to improve our systems to keep tabs on the main actors’ files. If we ever come to a story through him or build on his work, we will absolutely give credit, but he has no exclusivity in evaluating public patents.

Some of Dan’s comments have been deleted for violating our Terms of Use, but he’s welcome to criticize us or share his views. I appreciate having his voice on the website and hope to have a constructive dialogue with him.

And finally, I’m looking at his analysis now, and he came to very different conclusions than we did – for example, he didn’t mention the pedal sensor patent and, from my limited understanding, seems to believe that this is okay with an off-road- To be a reading system while we think it will be based more on driver input. I believe that if people read our respective stories carefully, they can see that they are independent and absorb publicly available information.

I hope this helps shed some light on our perspective. Regardless of whether you think we are right or wrong, please don’t attack Seb Stott for this. He’s not a thief, not a trash, not a scum or anything that is said. I’m the one responsible for asking him to analyze this patent and write a story. So if you have a problem with our approach, blame me. And anyway, if you like his job, follow Wheel Based. It’s all cool bike stuff, and I’m really excited to see what this technology will look like when it hits the market.

Many Thanks,
Brian Park, editor-in-chief

Here are the best ASX travel stocks yet in 2021