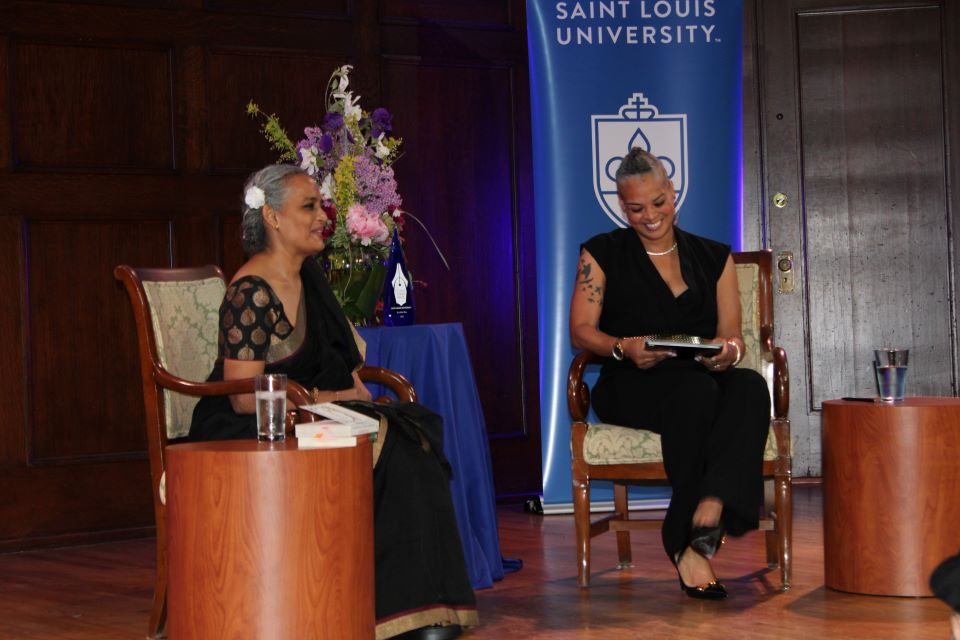 She accepted the award in a ceremony at the Sheldon Concert Hall that included a conversation between Roy and Amber Johnson, Ph.D., interim vice president for Diversity and Innovative Community Engagement at Saint Louis University.

Roy told the crowd she was proud to receive the award and excited to be considered in the company of other St. Louis Literary Award winners, but was thrilled that the award and its Campus Read program were attempting to Explore the work of honored authors.

Roy is the author of the novel The god of small things, which received the Booker Prize in 1997 and was listed as the New York Times Notable Book of the Year. her second novel The Ministry of Supreme Happiness was longlisted by Man Booker in 2017 and was a finalist for the National Book Critics Circle Award.

Roy said her art allowed her to share her beliefs with the world.

“Writing is something I have to do,” Roy said. “For me it’s something I do because I can’t do anything else.”

She noted that some have labeled her an intellectual terrorist and an angry, hysterical woman for her non-fiction books.

“I’m not an angry woman; I’m angry for a reason,” she said. “I have to shout things from the rooftops – whispering to my grandmother wouldn’t do anything.”

Presented annually by Saint Louis University Library Associates, the St. Louis Literary Award has become one of the nation’s most important literary awards. The award honors a writer who deepens our insight into the human condition and broadens the scope of our compassion. Some of the greatest writers of the 20th and 21st centuries have come to Saint Louis University to receive the honor, including Margaret Atwood, Salmon Rushdie, Eudora Welty, John Updike, Saul Bellow, August Wilson, Stephen Sondheim and Tom Wolfe.

As one of the oldest literary and cultural organizations in St. Louis, Saint Louis University Library Associates strives to build a closer relationship between the university and the community and promote the appreciation of literature. Library Associates work to increase the visibility of Saint Louis University Libraries and support the development of their world-class collections and services.