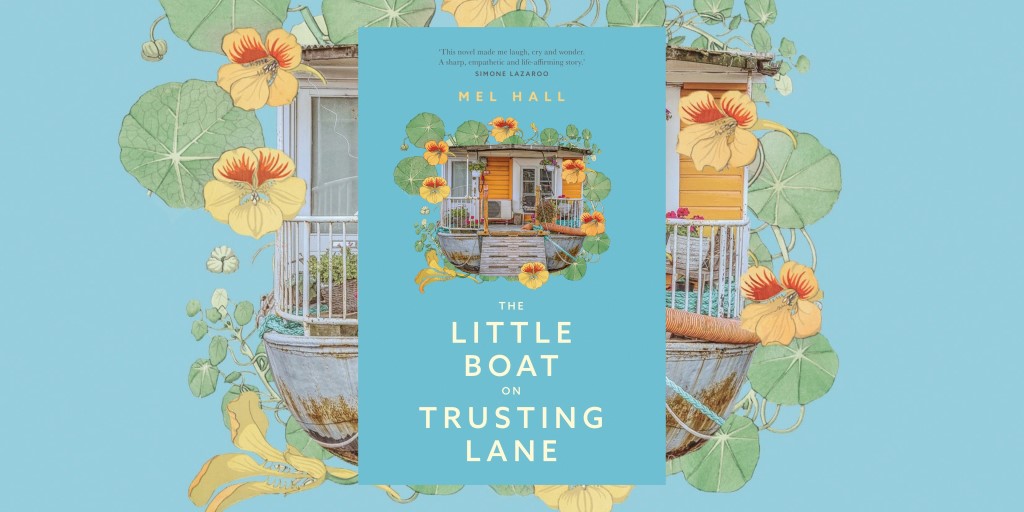 Mel Hallhis debut novel, The little boat in the trust lane, is a tender and thoughtful reflection on the power of community in the healing process.

The Little Mother Earth Ship is an alternative healing center based on a houseboat on stilts in the middle of a junkyard on Trusting Lane. Richard, who directs the center and the Circle of IEWA (Invisible Exit Wounds Anonymous), aims to provide spiritual nourishment and healing to his visitors. But the boat is starting to crumble, the council keeps sending warning letters and he’s somehow stuck in the past.

Meanwhile, his assistants Finn and August deal with their own problems and Richard doesn’t seem to notice them. Finn’s health makes her question her identity and beliefs as she traverses both her sexuality and the often combative terrain between alternative and traditional medicine. Meanwhile, August struggles with her loneliness between the frequent absence of her friend Tom and her inability to get in touch with Finn. Tensions between Richard’s team are heightened by the arrival of “aggressive healer” Celestiaa Davinaa.

While the alternate healing aspect of this story is strong, and Hall perfectly captures the essence of the movement without necessarily endorsing or discouraging it, the underlying message throughout is how fellowship helps with healing. It is Richard, Finn, and August’s relationships with each other and with the people around them that cause them the greatest fear and pain as they all struggle to find their place in the world and meaning in their lives. Ultimately, in order to move forward, they have to come together and try to understand each other.

Hall’s spelling is clever; Her style is perfect for highlighting the fears in each of her characters while weaving humorous social commentary. One example of this is Finn’s brooding over her beautiful colleagues in the health food store. Finn compares himself to the “superhuman” women who don’t wear make-up, don’t “shave, wax or epilate their armpits” and for whom the hairy armpit declares: “I accept my natural state, which is just ridiculously hot.”

Similarly, Hall manages to build Richard’s insecurities by gently digging at his local notice boards with their stray capital letters, exaggerated exclamation marks, and elongated ellipses; the IEWA creed created by him in acrostic format; and his divine and dateless username @RICH_NOT_YET_IN_HEAVEN. By using such a method to build her characters, Hall effectively mitigates what could otherwise be an overwhelmingly uncomfortable experience of fear.

The story can feel a little slow at times. Some sections are devoted to the discussion between Richard and Celestiaa about alternative healing practices. These can be difficult to follow if, like me, you are unfamiliar with alternative healing languages â€‹â€‹and theories. And while Celestiaa is the catalyst for change, it isn’t fully introduced until halfway through the book to shake things up.

However, each character is given space to breathe and develop at their own pace. They’re flawed in some ways – Finn is that terrible roommate who never cleans, August is sometimes louder and more pushy than she intended, and Richard is self-centered and gangly – but they’re all adorable in their own way.

Hall found the perfect combination of humor and compassion while exploring difficult concepts of chronic illness, mental health, sexuality, and belonging. Her writing is of a gentleness that invites the skeptical reader to ponder why people are looking for alternative healing methods and what can be gained from the feeling of spirituality and community. The little boat in the trust lane is a gentle and neutral examination of our relationships with one another and our own body.

FOUR STARS (OUT OF FIVE)

The little boat in the trust lane by Mel Hall is now available from Fremantle Press. Get a copy of Booktopia HERE.

More to discover at the AU: