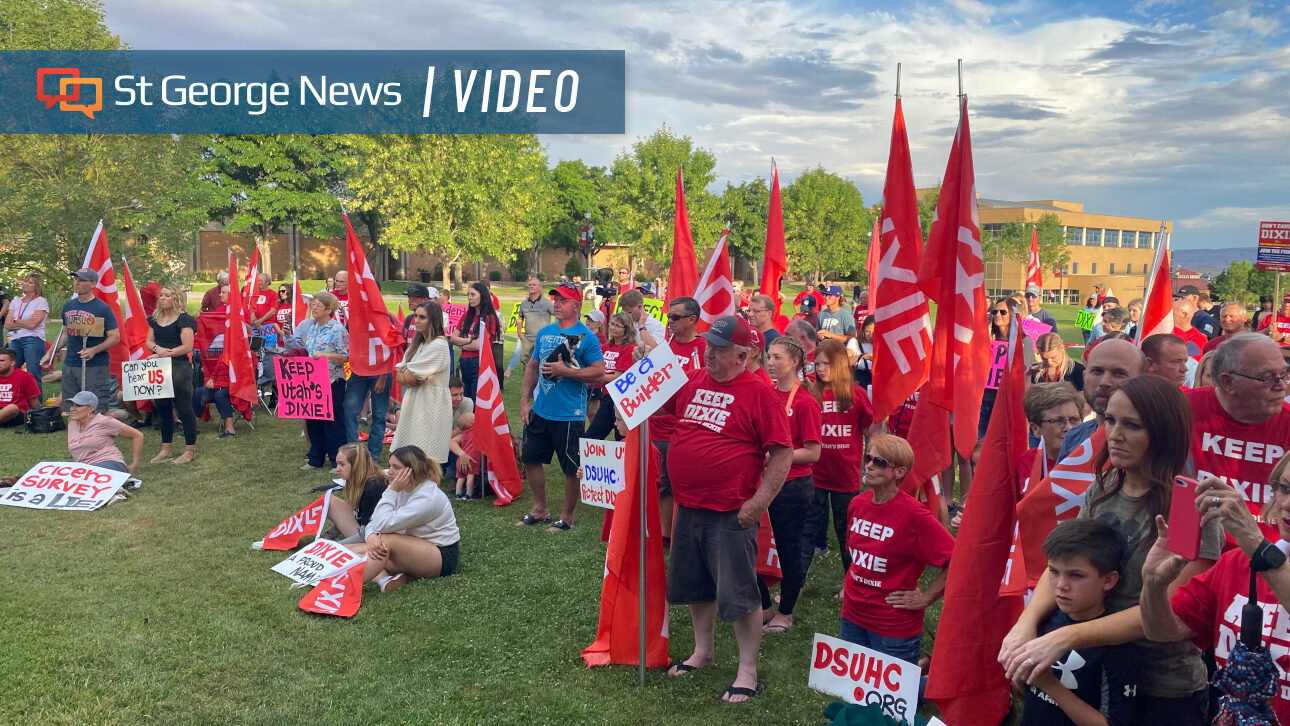 The crowd gathered on a lawn near a memorial to the area’s founders to attend the protest, led by Quinton Read, a student athlete from Dixie State, who said he was inspired to organize the event when he found that the opinions of several groups were correct are being ignored.

“We want the administration to listen to what people say: the students and the community,” Read said. “We just have the feeling that people weren’t heard. A kind of connection break occurs here. “

The university announced on June 14 that Utah Polytechnic State University 11-3 had been approved by a naming recommendation committee. The proposed name is pending approval or rejection by the Dixie State University Board of Trustees.

After meeting with members of the naming recommendation committee Wednesday, Read assured protesters that their efforts have not gone unnoticed, saying that he believes the university is already changing its stance and favoring something closer to “Utah Tech.” .

“There are two camps: there is the ‘keep the name’ camp, but then there is a very large part of the people who are against the name they proposed and agree to change the name,” said Read opposite St. George News. “Personally, I like Dixie State, but I think the reason we didn’t represent much of the second group today is because they are mostly students and the students are not here.”

According to officials from the state of Dixie, the university has been seeking input from students at every step of the process.

Some students criticized the polls, saying that they felt compelled to choose a variation of “Utah” and “Tech” while ignoring other descriptors such as “desert”, “desert” or “Zion”.

“I think we should change it, but I don’t think we should change it in UPSU,” said Catherine West, a Dixie State student. “I think the polls could have been done a little better. In one part of the survey, you had to select names from Utah Tech. I think UMAC (University Messaging and Communication) needs to take a step back and really evaluate what the student body wants, maybe choose a new name and try again. “

Each of the speakers gave reasons for their resistance, went into the history of “Dixie” as a region and identification feature of the school and asked the demonstrators to express their feelings by email to the board of trustees.

Thick clouds that threatened rain dissolved at the beginning of the demonstration, allowing participants to enjoy a cooler evening than usual. The participants came as individuals, with families or in groups of friends, with lots of sporty red Dixie t-shirts and waving red Dixie flags.

“I feel like the turnout was pretty good: we had a lot of parishioners,” Read said. “There weren’t as many as if the students were in town. That was an important factor in this whole name change thing: They tried to do this while the students were gone. “

Opponents of the entire name change process were people of all ages and origins, with the majority of “Dixie” supporters being long-term residents and alumni of the past decades.

Lee and Carol Bunnell went to the protest to oppose any name change and asked why someone would want to change a name that “has existed for a hundred years”.

“I taught here for 33 years,” said Lee Bunnell. “I was a football coach for nine years. I think the newcomers are the ones who oppose it, and I think the students who said they had trouble getting a job because of the name probably weren’t qualified in the first place. I just don’t think that’s a legitimate reason. “

Others, including Jillene Kirkland, never attended Dixie State University. Nonetheless, she said that “Dixie” means something unique to the Southern Utah people and holds a special place in their hearts.

“For me, it’s a heritage thing,” said Kirkland. “I feel like the pioneers who came here worked so hard for their existence. I just feel like Dixie is a lovely name for us and has nothing to do with racism. We hope they keep the name. “

The few in attendance who were in favor of a name change but against the Utah Polytechnic State University were mostly young and members of the student body.

Gabriel Ennis and Claire Schermerhorn took part in the protest as a tribute to “UPS-U” and forged the initials of the recommendation and their similarity to the parcel delivery service UPS. In addition to the couple’s antics, many protesters arrived with cardboard boxes to poke fun at the initials of the proposed name.

“I really don’t like the name Utah Polytechnic State University,” said Ennis. “It’s muzzle, it’s verbose, and I don’t think it represents the university as a whole.”

“Actually, I think the change is okay, but I would have preferred Deseret State University,” says Schermerhorn. “I think the acronym and keeping the ‘D’ on the mountain would be important to me.”

The protest was organized with significant support from Zion Live Events, with the company providing sound systems and helping to plan the ceremony. Read acted as moderator of the event, gave the opening message and introduced the speakers.

As the meeting drew to a close, retired St. George Mayor Daniel McArthur reached out to the assembled crowd and led the group in a region-specific version of the song “Are You From Dixie.”

Ammon Teare has always considered southern Utah his home away from home after spending the summers and vacations visiting his family in Cedar City and St. George. With a love for the wilderness and a passion for writing, he has dreamed of becoming a reporter since elementary school. After moving from Texas to New Mexico to Utah during his childhood, Ammon studied journalism at Utah State University, where he graduated in May 2020. In his spare time, he can be seen watching Utah jazz or playing a board game with his wife, hiking in the great outdoors, or in a comfortable spot reading a fantasy novel.