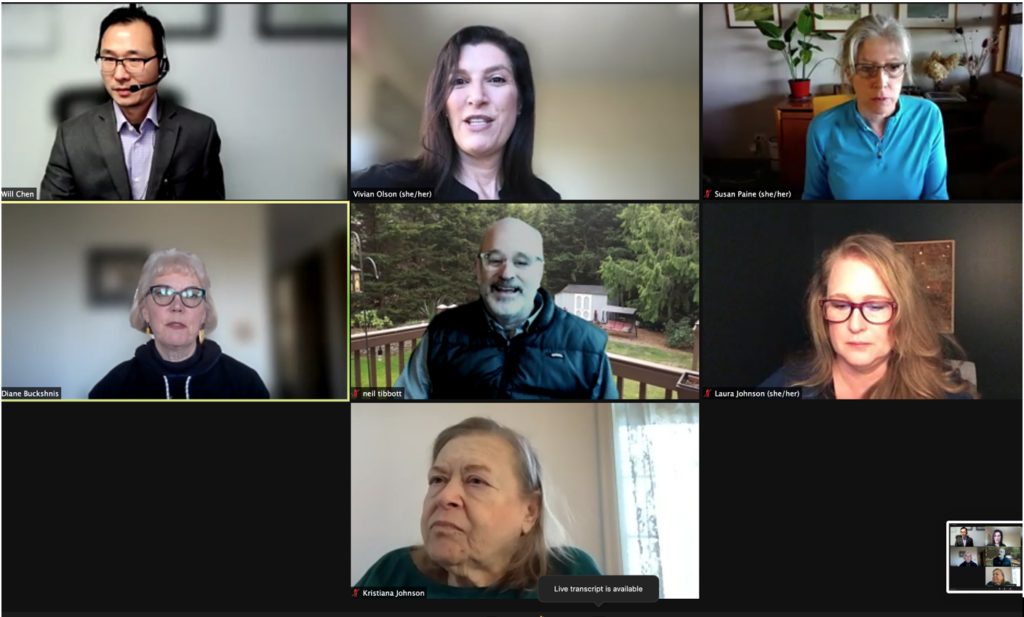 It can be difficult to look at yourself in the mirror. This is how Edmonds City Council members spent Friday – looking within themselves to examine how the council makes decisions, what they can do to be more efficient, and touching on some of the emotions that have permeated past council meetings .

The occasion was the Council’s annual retreat – held again this year via Zoom – a year complicated by COVID, by remote meetings, by emotions and frustrations not only in the Council but in every neighborhood of the city. The session was as notable for what members did not talk about as for what they discussed. There was no talk of city projects or the budget or long-term plans. As the day progressed, the council focused more on what they need to do — as individuals and as a group — to work better together. It was a difficult conversation at times.

Despite their personal views, Council members signaled that they knew they had busy work. Neil Tibbott rated Communication as “fairly low”, 1 or 2 on the scale. Diane Buckshinis gave them a 3 or 4 rating, saying, “We’re trying to do our best.” Will Chen gave the council a 2; then added that he wants to “stay positive and be positive.”

Vivian Olson agreed, “I still think there’s a big gap between communicating and where we want to be.” Kristiana Johnson said she felt “the last two years have been very oppressive and uncommunicative felt; I want to move up the ladder and work at a 4-5 level.” Susan Paine added, “It’s up to us to be respectful and I don’t think it’s always been respectful; Sometimes the emotional things that happened in the past get in the way of productive discussions.” Laura Johnson did not participate in the communication exercise. My Edmonds News contacted Johnson to ask why and received no response.

Gettleman calls her workshop “Improv Communications” and uses some of the same techniques that improv comics employ. She reminded council members that there are several things that need to happen to be a well-functioning team — finding common ground, building trust, and being clear about your intentions.

Earlier in the day, Edmonds Port Commissioner Jay Grant, who was also a member of the Edmonds Salary Commission, held a session on efficiency and council procedures, something the council struggled with. Grant is a former director of the US Port Security Council, serves as Secretary General of the International Organization of Airport/Seaport Police and has a 30-year career in government positions.

He spoke about five qualities that organizations need to be successful: courtesy, equality, responsibility, respect and relationships. “Not everything is fair,” Grant told the group, “but processes should be fair.” He had been asked to examine the council’s efficiency and how it uses its committee time. “Sometimes,” he told members, “you get into a lot of little things because the facts aren’t presented to you before council meetings.” Grant asked members to look at how they structure their committees; This committee time should be used to go into the details so that by the time the issues reach the full Council “everything is settled”.

Kristiana Johnson agreed that council meetings are not managed efficiently, some things go to the whole council and committees are bypassed, resulting in “tedious, fussy discussions between the seven of us”.

Others agreed that the committee structure should be used more efficiently. Diane Buckshnis added that “some of our meetings seem to have gone astray because they (items) weren’t on the agenda.” She blamed some of the blame on Zoom meetings, which she says slows things down, making it difficult to build good business flow and limit easy public comment. Everyone agreed that Council meetings have become too long; It lasted until 11 p.m. last week

Members supported the idea of ​​putting all motions in writing to avoid “surprises” in meetings and to give the Council more time to understand the content of the motions. Laura Johnson said removing surprise motions gives members a better opportunity to check what’s on the agenda; believes, however, that Council members must retain the power to raise issues when necessary.

Laura Johnson said she wasn’t comfortable with the way that part of the retreat came together; that citing specific examples of problems would ’embarrass’ some members. Grant said that was not his intention. Johnson responded, “We’ve just had a very emotional review of the budget discussion for five weeks and that’s not helping at the moment.”

Some members feel they are not getting enough access to resources from the city government. Kristiana Johnson said members have to go through a department head instead of going directly to department staff. Will Chen agreed. “I feel like we don’t have access to the directors or staff,” he said. “I feel like we shouldn’t be talking to the directors.” Diane Buckshinis said she’s become accustomed to the way the current government releases information, adding that she’s “never had a problem getting information.” Susan Paine told the group, “I haven’t found anyone who hasn’t reached out to me.”

The council should have more support from two new assistants unveiled on Friday.

Susan Babcock has worked for Edmonds Parks, Recreation and Cultural Services Department for the past nine years. She has helped develop COVID plans for the Edmonds Summer Market, worked with Cemetery Management on software design, Edmonds Underwater Dive Park and with the City Arborist on City Forestry Funds.

While living on the San Juan Islands, Babcock was a founding member of the senior center; has taught in Los Angeles and is an artist who makes animal illustrations. She painted the Winter Walk mural across from Edmonds City Hall.

Beckie Peterson said she “sort of” grew up in Edmonds, spent a lot of time here with her grandparents and now lives in their home. She has worked in human resources, organization and business development, primarily in healthcare. Peterson said she spent a lot of time in planning and community development and was part of the group that started Edmonds Comedy Night. As a military wife, she says she’s learned a lot about mixed “melting pot” neighborhoods and “bringing people together.”

The Council has not yet decided on their tasks or timetable.

The Council went into this retreat knowing what some of his problems are and focused on opening lines of communication as one way he could improve this year. As the vCouncil looked in this mirror and saw some possible ways forward, Council President Vivian Olson reminded members that the definition of ‘community’ is ‘common unity’.