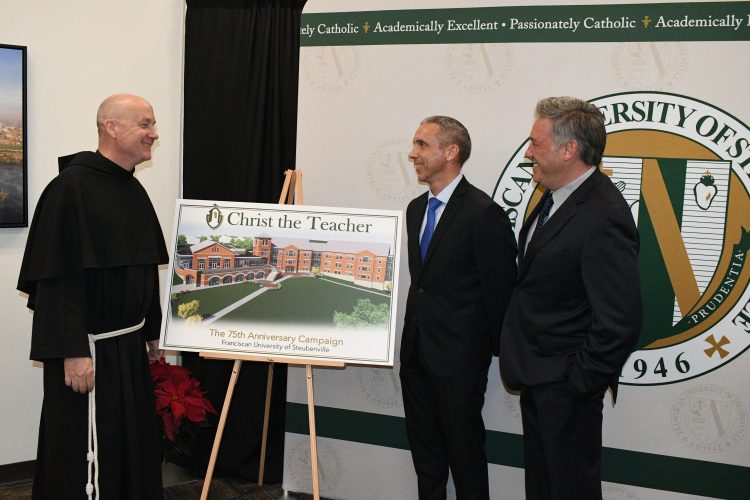 Michael D. McElwain MAKE BIG PLANS – Officials at Franciscan University of Steubenville announced a $ 75 million goal for the “Rebuild My Church” campaign. The announcement on Friday morning was made from left by Rev. Dave Pivonka, TOR, President of the University; Bob Hickey, vice president for funding; and Chris Irvin, member of the Board of Trustees.

It is the university’s most ambitious fundraising drive and part of an effort to help the school continue to respond to God’s call to rebuild my church based on the call of St. Francis of Assisi that Rev. Dave Pivonka heard more than 800 years ago. TOR, president of the university, said during the announcement.

“It (Rebuild My Church) is also the cry that Franciscan University is hearing today and responding with a new strategic plan and capital campaign that will breathe new life into our frightened mission.” said Pivonka.

≤ Upgrade and expand academics with $ 48 million flowing into the heart of the project – a new academics and conference building from Christ the Teacher. The two-wing building will accommodate 110,000 square meters of study space and will be the first new academic building on campus in more than 20 years;

≤ $ 18 million increase in grant and scholarship opportunities to continue to attract students, many from large families with limited funds; and

≤ With a donation of $ 5 million to global Summer Youth and Adult Conferences, build outreach, evangelize, and expand the university’s efforts to revitalize Catholics and their communities.

Additional funding for the campaign includes $ 2 million for the Center for Leadership and Entrepreneurship; $ 1 million for a new eight-bed, four-simulation-lab for the nursing department; and $ 1 million to help develop new courses under the Franciscan Criminal Justice Program.

“This is by far the most ambitious campaign the university has ever run, so it is very humbling to share this number with you.”

Hickey and Pivonka said the 10 months already spent seeking that funding has been tough, but rewarding, and at times an emotional experience.

Hickey said the effort was heartwarming and wondrous.

“We’re pretty excited about this and about to develop some relationships with the diocese of western Pennsylvania.” said Hicky.

Of the $ 65.2 million already committed, nearly $ 40 million will be credited to the Board of Trustees, taking current and former members into account.

Chris Irvin, a trustee, got emotional talking about his love for Franciscan University and the community.

“The growth of this place is really a miracle”, said Irvin, remembering that the St. Joseph Center was a roller skating rink when he was young. “Half of the buildings on campus weren’t here when Father Dave and I were studying in the late 1980s.

“This place means so much to me and my family … It was a pleasure to witness the miracle of growth over and over again. I can assure you that the men and women I work with on the board are fully committed to the mission of this capital campaign. “

The spiritual father and president of the university actually spoke last at the announcement.

“I believe the Lord, in the spirit of St. Francis, invites the Franciscan University again to work to rebuild the Church.” said Pivonka.

“The reality, unfortunately, is that today we live in a world where many people see the church as part of the problem. But I firmly believe that the Church is part of the solution and the Franciscan University will be at the center of it. “ Pivonka told the crowd.

Several current students were among the listeners to the announcement.

“Let us always remember that you (the students) are the reason we do what we do.” said Pivonka. “The reason you are here is so that we can serve you, inform you, love you and care for you … and then you can graduate.”

The university expects to officially break the ground for the Christ Teacher Building next fall and raise the remaining $ 9.8 million by fall 2023.

Get the latest news and more in your inbox