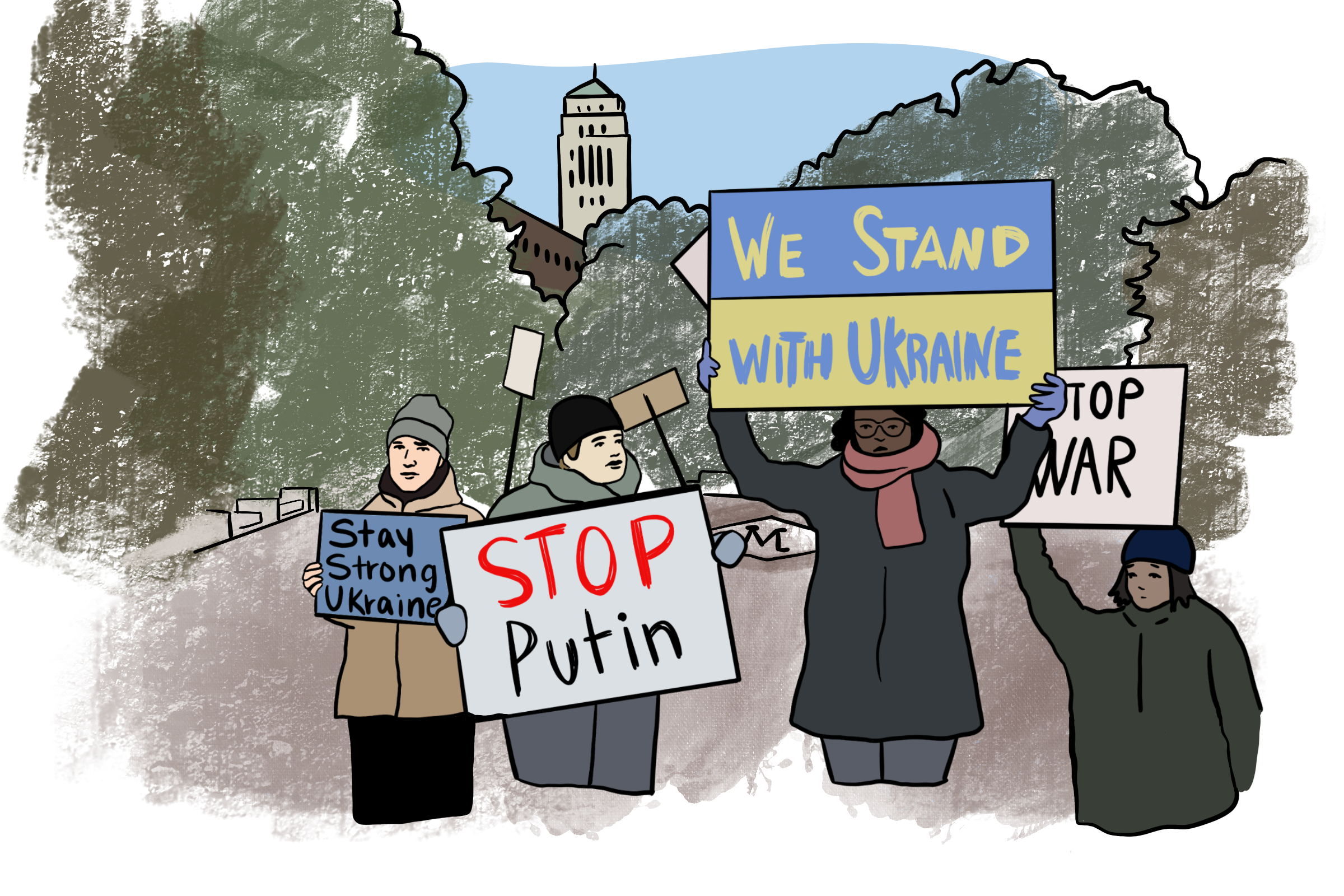 Interim university president Mary Sue Coleman announced her support for Ukraine and Ukrainian students in an email sent to students on Monday, nearly two weeks after the invasion of Ukraine. Coleman condemned the invasion and mourned the lives lost.

“I condemn this invasion and reckless assault on liberty,” Coleman wrote in her email. “The grief, anger and pain are devastating and I feel such sadness for the many members of our community whose loved ones and communities are at risk.”

The email included a list of resources for Ukrainian students. Coleman shared information on the benefits of Temporary Protection Status (TPS) and additional visa applications. Affected students can obtain information on the additional services of the TPS from the UM International Center.

“To assist Ukrainian nationals currently residing in the United States, Department of Homeland Security Secretary Alejandro N. Mayorkas has directed the country to grant temporary protective status for 18 months,” Coleman wrote. “The UM International Center will share information about TPS directly with Ukrainian students and researchers with F or J visas as soon as details on the application process are available. UM supports advocacy efforts that would nominate Ukraine for special student assistance for F1 visa holders to allow for greater flexibility in enrollment and employment.”

The email also included a list of organizations seeking help in dealing with the humanitarian crisis in Ukraine, as well as a list of upcoming university events related to Ukraine and Russia.

College Republican President Ryan Fisher said he was surprised by the lack of support from the university.

“Oddly enough, I didn’t get very many[emails about the conflict],” Fisher said. “I’ve found that there isn’t a lot of noise going on on campus or from the university administration about the Ukrainian situation compared to what there should be. This is a massive conflict and… there is definitely some potential for this type of conflict to erupt. You would think that’s a pretty big deal – I certainly think it is and I hope the university pays more attention to it in the coming weeks.”

During the week of February 28, Rackham student Hanna Onyshchenko — with the help of Eugene Bondarenko, UM Professor of Slavic Languages ​​and Ukrainian Culture, and some colleagues — authored an open letter asking the Board of Regents to Invasion of Russia to condemn Ukraine. The letter, signed by over 700 students, faculty and staff, calls on regents to support Ukrainians and community members affected by the conflict. The letter also urges the university to divert its investments from “any non-humanitarian involvement in institutions based in the Russian Federation and the Republic of Belarus.”

In an interview with The Daily, Onyshchenko said she was inspired by the letter of support released on February 28 by MIT President L. Rafael Reif, which outlines specific steps the institution is taking in response to the Russian government’s actions, such as the termination of the MIT Skoltech Program, a collaboration between MIT and the Skolkovo Institute of Science and Technology in Russia. Onyshchenko said she wanted to show the Council of Regency that there are many members of the UM community who want to see similar action by the university.

“Not only did they say ‘we condemn the war,’ they took specific steps (such as) cutting the (Skoltech) program,” Onyshchenko said. “I wanted to show the Council of Regency that there are many people supporting this (cause), that it is not (just) the voice of a small group of people. There are many people who believe what this letter says.”

Onyshchenko also spoke about the importance of individual members of the UM community publicly demonstrating their support for Ukraine and continuing to raise awareness about the invasion. She organized a vigil to be held on Wednesday, March 9, in honor of Ukrainian lives lost in the invasion.

“We hope for feedback from (the administration) and if it doesn’t work, we will continue,” Onyshchenko said. “There will be a vigil on Wednesday. We want to be present in public space. … We will focus our efforts on raising funds and raising awareness of the war in our community.”

LSA freshman Ihor Pavlenko said his family left everything in Ukraine when fleeing the country, which affected his ability to pay tuition.

“I’m currently working on financial support from the university because the situation in Ukraine is crazy… the business has shut down and there is no capital to work with,” Pavlenko said.

LSA senior Noah Streng, president of the UM group of Young Democratic Socialists of America (YDSA), also stressed the importance of financial support for students with families in Ukraine.

“It’s obviously a very urgent time and I think people are starting to think about how they’re going to pay this semester or next, especially those on payment plans,” Fisher said. “The university should definitely try to make some of these payment systems lenient for Ukrainian students.”

Streng said it was important to use the university as a safe place to educate students about the invasion and its history.

“As a university, we are committed to the public to discuss these issues in an educational and nuanced way, and that includes educating the public about the historical context of why we’re here in the first place,” Streng said. “This should include serious discussions about the long history of NATO’s imperialist actions around the world that have wreaked havoc on people around the world. Ukraine is not the first example of this, it will not be the last, nor will the historical context of why Russia is currently ruled by a right-wing, corporatist government. These cases did not come out of nowhere, but are the result of a long history of our actions that have caused so much suffering around the world, through the rise of reactionary governments and military actions that ultimately harm working-class people everywhere. ”

Sam, a student who asked to remain anonymous for fear of retaliation from the Russian state, said she was concerned that her status as a Russian citizen could affect her ability to receive an education in the United States.

“I was very scared, and I am still very scared, that with all these sanctions and visa cancellations, I could be expelled from the US,” Sam said. “I’ve worked really hard to get in and at least live my dream and achieve my goals and it just feels so unfair that because of a stupid decision (made by the Kremlin) everything could just fall out of my hands, especially at Prohibited international transactions.”