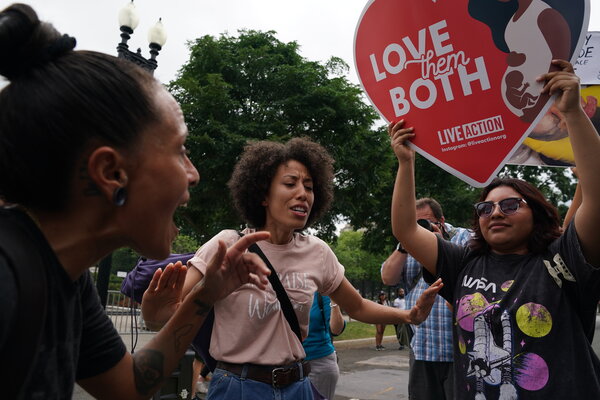 Catherine Starr was 17 when she took part in her first demonstration to advocate for abortion rights outside City Hall in St. Louis. It was May 24, 1973. Just a few months earlier, the Supreme Court had ruled in Roe v. Wade decided.

Women had gained a constitutional right to abortion, but America would argue about it for another 50 years. The Supreme Court’s decision last week to overthrow Roe has plunged the country into yet another turmoil that will seem all too familiar to those experiencing it for the first time. Three women at the forefront of the abortion rights movement, before Roe was law and in the early years after the verdict, told their stories to The New York Times.

When Ms. Starr protested in St. Louis that day, she was joined by her mother and grandmother. The three generations of women gathered to protest Mayor John Poelker’s ban on abortions in city hospitals.

In the early days after Roe, legal access to abortion was difficult or unavailable in many states. Only the previous year, in 1972, had unmarried men and women been granted the right of access to contraception.

The Roe decision had come too late for Ms. Starr. A year earlier, at 16, she was pregnant. With no option for a safe, legal abortion, she said she gave birth to a boy and then put him up for adoption.

Ms Starr went to the rally because she “wanted to make sure the next little girl who gets pregnant has an option,” she said.

“Giving up a child is like losing one to death, but in a way it’s worse because you don’t know anything about the child,” said Ms. Starr, now 66. “I had a little boy and years went by and I did sat back and asked me if he’s even alive, is he happy, is he healthy?”

About 10 years ago, Mrs. Starr’s son found her and they got back together. The conversation was uncomfortable at first, she said, but ultimately therapeutic. Her son told her he was grateful for her decision and that he had a pretty good life. He also told her he was pro-choice, she said, a pleasant surprise to her.

“Most children probably wouldn’t want to know that their mother was thinking about aborting them,” she said. “I did. I was 15 when I was pregnant and 16 when I had him, and I was terribly young.”

“He asked me, ‘You could have had an abortion, why didn’t you?’ And I said, ‘Well actually I couldn’t do that, it wasn’t legal at the time,'” she continued. “I said I didn’t want an illegal abortion and when I started feeling him in there, I just couldn’t do it.”

Susan Bilyeu was counseling a patient at an abortion clinic when she heard screams. When she opened the door, she saw flames and a nursing assistant on the floor holding her eyes.

An arsonist had attacked the Concerned Women’s Clinic in Cleveland on February 15, 1978, a busy Saturday.

Ms. Bilyeu, then 25, was caught up in an escalation of violence around abortion clinics in the late 1970s. Court challenges to prevent abortions have repeatedly failed. People chained themselves to the doors of the clinics and yelled at women and staff as they entered the facilities. “It was really quite nasty,” said Karissa Haugeberg, an assistant professor of history at Tulane University.

At Ms. Bilyeu’s clinic, a man posing as a delivery worker splashed petrol in the assistant’s face and set the building on fire. Ms. Bilyeu helped carry the injured worker out of the burning building. There was also a 16-year-old who was in the middle of an abortion. They called an ambulance and took her to the women’s hospital two blocks away.

“No one changed their mind about having an abortion that day,” she said.

Ms. Bilyeu said she feels deeply connected to the abortion rights movement because of the stories her mother, who was born in 1917, told her, including about her aunt who nearly died from an abortion.

“I got involved because I knew people who were struggling,” she said. “I’m not pro-abortion, I’m pro-choice. No one should be forced to have a child and there is no way I want anyone to die from it.”

Loretta J. Ross grew up in a conservative household in the 1960s. She became pregnant at 14 after her cousin raped her. Her only choices at that point, she said, were to raise the child herself or put him up for adoption. In 1969 she gave birth to her son and kept him.

The experience shaped Ms. Ross, now a professor at Smith College, as an activist and black feminist, she said.

“I went from being a terrified teenager to an active teenage mom,” she said, “which had a definite impact on my consciousness and it separated me from the other kids at school.”

She enrolled at Howard University in 1970. Washington, DC was after the assassination of Rev. Dr. Martin Luther King Jr. in turmoil. Ms Ross was tear gassed while taking part in her first demonstration at 16. She also became pregnant again. Her older sister forged her mother’s signature on the permit slip, but because Washington legalized abortion in 1971, she was able to get one.

For Ms. Ross and her classmates, however, other issues took precedence, such as apartheid and gentrification. There was no sense of urgency for Ms Ross about abortion rights, she said, until the 1976 Hyde Amendment, which banned federal funding for abortions, which disproportionately affected low-income women, was passed.

For Ms. Ross, her pro-choice activism suited, and at times complicated, her political coming of age as a black woman.

“When I was with the people of the Black Nationalist Movement, I felt more feminist than not,” she said. “I would describe myself as a black Marxist feminist. But then, when I was dating white women, I was like, ‘I’m not a feminist like all of you, so I don’t want to use that word.'”

Concerns that black women were not represented in the women’s movement prompted Rep. Eleanor Holmes Norton, the non-voting representative from the District of Columbia, to co-found the National Black Feminist Organization. Despite the group’s formation in 1973, given Roe’s background, abortion didn’t feature prominently in their talks, she said.

Black women receive about a third of abortions in the United States, according to recent data from the Guttmacher Institute, a reproductive health research group that advocates for abortion rights. But Ms Ross, who tried to help the National Organization for Women plan a women’s rights march, said it was difficult to get black women’s organizations involved because few wanted to get involved in the abortion debate.

For a second march in April 1989, which drew more than 600,000 people, Ms. Ross made a banner for women of color to gather around for visibility.

Over the years, she stuck to one principle. “I would definitely stand up for women’s rights,” she said.