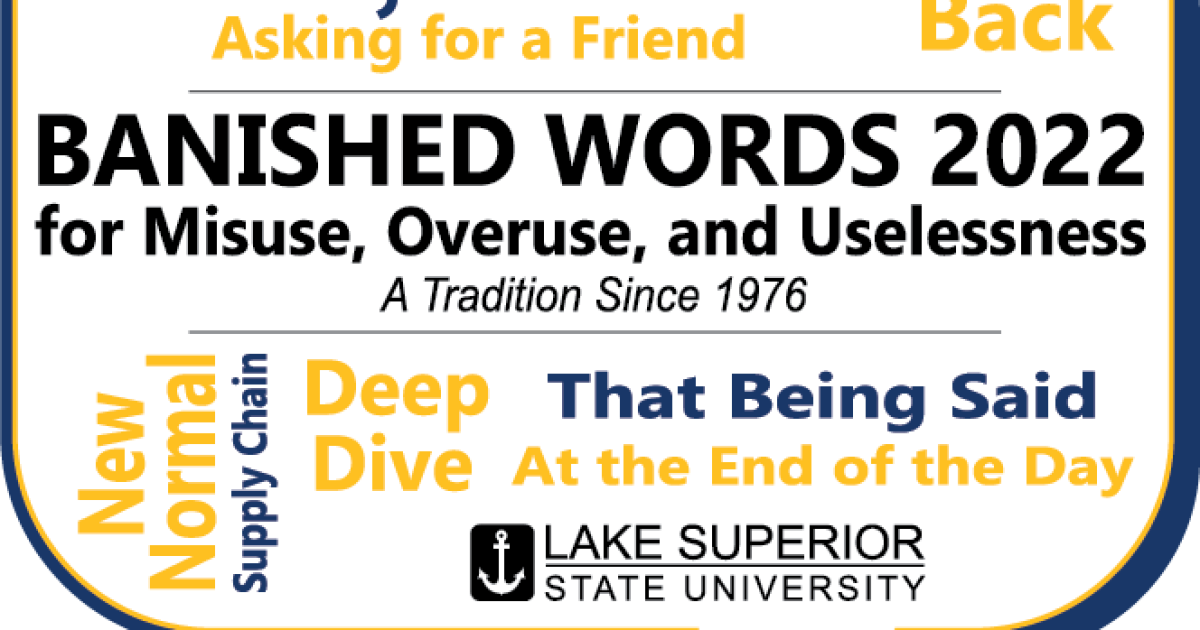 Ah, it’s that time of year again when we’re figuring out which words to never use again – at least according to the nominations sent to Lake Superior State University.

The university has published its annual Banished Words List, and to top it off number 1 is “wait what?”

“According to many nominees and competition judges in the LSSU English Department, these two four-letter words should not belong together under any circumstances, because the two-part ongoing question is insincere, divergent, distracting and other devastating words that begin with the letter d,” said the press release Lake Superior State University.

Seven of the 10 words banned this year are conversation-based, while the other three are related to COVID-19.

According to the LSSU, nominations this year came from most of the major US cities and states, as well as from Norway, Belgium, England, Scotland, Australia and various provinces in Canada. You have been compiling this list since 1976.

Nominated by writers nationwide for abuse and overuse, this phrase incorrectly replaces “You’re welcome” when someone says “Thank you”. Another botch concerns insensitivity. “If I’m not worried, I don’t want someone telling me not to worry,” said one employee. “When I’m excited, I want to talk about being excited.” Despite its insignificance, the term emailing is recommended by the Google Assistant.

Over twenty years after the phrase was originally banned in 1999, the day for that abused, overused, and useless phrase is still not over. “Often times, things don’t end with the end of the day – or even with the aftermath of whatever happens,” observed one sage. Others consider “day” to be an inaccurate measure. Today? Present? Exile in 1999: an overused summary of a conversation or debate, often by politicians and experts.

Nominators called this phrase a verbal filler, redundant justification, and pompous demeanor. For example, “but” or “but – even“ said that ”” fulfills the task as a transition instead of a pun. “Go on and say what you want!” Demanded one participant. That being said, its usefulness is certainly doubtful. As one commentator philosophized: “At the end of the day, if you will, it already happened.”

Abuse and overuse through deception – because the friend is a ruse. This cute phrase, often used on social media posts to prevent self-identification, does not fool anyone. To paraphrase a sage, “Used once to avoid embarrassment, as in, ‘Do you know a good proctologist? I ask for a friend. ‘ Sometimes an occasional sitcom joke. Now an overused day that has absolutely no relation to its predecessor. “

Treats colloquia like an ice skating rink, as if we had to return to our previous location in order to return to a previous topic. Let’s go back to why we should get rid of this jargon. It’s a conversation, not the Winter Olympics. One grammarian said: “The most overused expression in business, government or other organizations since ‘Synergy'” – which we banned in 2002 as evasive flat-rate terminology and bells and whistles.

“The only opportunity to immerse yourself in something is when you step into a body of water and not dive deeper into a particular topic or book,” warned one petitioner. Another stipulated that people who do the set are not near a pool, lake, ocean, or sea; Hence, they are more shallow than diving deep. One editing expert asked himself: “Do we need ‘deep’? I mean, does anyone dive into the shallow end? “

Words and terms banned in 2022 that arise from COVID-19 matters:

Overused collective term for the effects of COVID-19 on humanity – and finalist of the ban last year for similar reasons. “Those who scream about the old days of 2019 use this to inadvertently signal that they have not come to terms with what ‘normal’ means,” explained a monitor. “Is that really ‘new’ after a few years?” Another speculates. Exiled in 2012 for carelessness, defeatism and apathy due to social missteps.

People switched from face-to-face exchanges to virtual meetings to follow the COVID-19 social distancing protocol and the unwitting deafening silence reigns on both sides of the camera. So overuse and uselessness due to incompetence. One discerning submitter summed up the problem as follows: “We have been working remotely and visiting for two years. It’s time everyone figured out where the mute button is. ”Or, as one joker puts it,“ Hello? Hi?”

Word watchers noted the frequent, unfortunate occurrences of this phrase towards the end of this year when the coronavirus was ongoing. “It is automatically included in the notification of consumer goods shortages or perceived shortages. In other words, a catchphrase, ”concluded one analyst. “Supply chain problems have become the scapegoat for anything that doesn’t happen or arrive on time and for any scarcity,” noted another. The disadvantageous consequence: overuse to the point of weariness.

“Say what you mean and mean what you say. It couldn’t be easier or more difficult, ”said LSSU President Dr. Rodney S. Hanley in a press release. “Each year, submitters try to suggest the words and terms that should be banned, paying close attention to what humanity is saying and writing. Taking a deep dive at the end of the day and then circling back makes perfect sense. Wait what? “