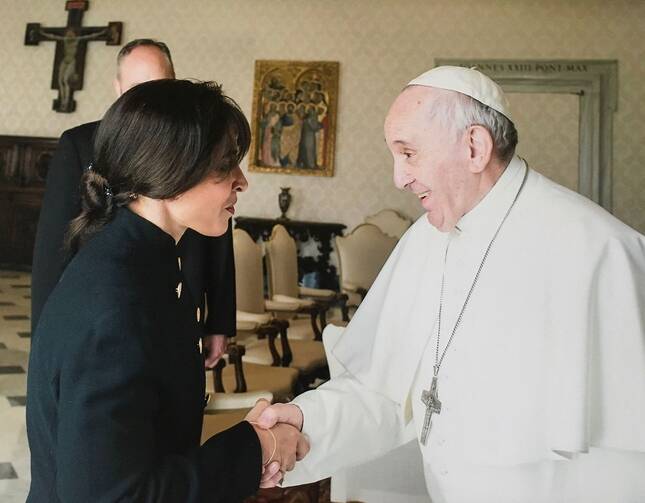 Pope Francis goes to college: The Vatican announces a virtual meeting with university students across America

Pope Francis will hold a dialogue with university students from North, Central and South America on February 24. The historic event is being hosted by Loyola University Chicago in collaboration with Argentine theologian Emilce Cuda, the new head of Loyola University’s Office of the Pontifical Commission for Latin America, who persuaded the Pope to attend.

In an exclusive interview with AmericaMs. Cuda, who Pope Francis appointed on July 26 as the first woman to head this Vatican office, explained that Loyola University invited her to have a dialogue about the synodal process currently underway in the Catholic Church worldwide.

She took up her post at the Pontifical Commission for Latin America last September, where she works with Rodrigo Guerra López, a Mexican lay professor and secretary of that office. The Commission was created in 1958 “to advise and assist the particular Churches of Latin America” ​​and “to study the questions pertaining to the life and progress of these Churches”, although in reality it served as an instrument of control for the Vatican and the Latin American Episcopal Council (known by its Spanish acronym CELAM), which was founded in 1955. But under Pope Francis, the commission’s role has changed, and its current president is Cardinal Marc Ouellet, prefect of the Congregation for Bishops.

The historic event is being hosted by Loyola University Chicago in collaboration with Emilce Cuda, the new office director of the Pontifical Commission for Latin America, who persuaded the Pope to attend.

When Ms. Cuda arrived at the Vatican, she suggested to Cardinal Ouellet and Professor Guerra López that the commission’s work should focus on building links between North and South America, particularly in the areas of migration, energy and food. This encounter among university students is a step in the process of “building bridges” between the continents.

Explaining the genesis of the upcoming event to students and the Pope, Ms. Cuda said that in June 2021, before Pope Francis appointed her to the Vatican post, Loyola University had invited her to give a lecture on synodality in 2022 which would allow a conversation about how to interpret what is meant by “the synodal way”.

But she told Loyola University that she wasn’t just interested in hosting another conference on synodality. Instead, “she suggests[d] to undertake a synodal action involving migrant university students from North and South America.” Ms. Cuda explained that she wanted to focus on migration, not from a humanitarian point of view, to “help migrants when they arrive in a new country”. “to look at the causes of migration from a scientific and technological perspective and to ask what we can do to solve them.”

Migrants are portrayed in the media as cleaners or laborers or in the gig economy, Ms Cuda added, while the media rarely shows migrants working in scientific or technical fields.

Ms Cuda said she wanted to “involve our advanced students to look for solutions in each country”. Most migrants from Latin America are economic migrants, not refugees, she noted, and she believes the causes of migration are “structural” and related, for example, to foreign companies taking resources away from countries in the region.

Migrants are portrayed in the media as cleaners or laborers or in the gig economy, Ms Cuda added, while the media rarely shows migrants working in scientific or technical fields. To correct this, she wants to give this second, underrepresented group of migrants more visibility. She suggested to Loyola a synodal action – which, in the spirit of synodality, would involve students coming together to discuss and hear each other’s thoughts on the root causes of migration – rather than a conference.

Four Loyola Professors – Peter Jones, Interim Dean of the Institute of Pastoral Studies; Felipe Legarreta; Michael Murphy, director of the Hank Center; and Miguel H. Díaz, former US Ambassador to the Vatican – enthusiastically agreed with Ms. Cuda’s vision. One of them “suggested with a smile that it would be good to get the Pope to attend,” she said.

“At first I thought it was a crazy idea,” she added. “But two months later, when I saw Pope Francis on Italian television on a program called ‘The Invisibles’, speaking to people on the fringes of society and the influence he had at the time, I came to the conclusion that it was wonderful would be to involve him in this synodal event as well.”

Emilce Cuda sent the Pope a letter proposing Francis to attend the event, and she was surprised and overjoyed when on December 20 he replied: “Yes, I will attend, but you must help me.”

Ms. Cuda sent the Pope a letter suggesting that Francis attend the event, and she was surprised and overjoyed when he replied on December 20: “Yes, I will attend, but you must help me.”

She informed Loyola Chicago, which started organizing the big event that will be attended by 100 students from Jesuit, Catholic and secular universities, most of them migrants or from migrant families. To select the students, Ms. Cuda and the four Loyola professors worked hard for two months contacting universities in the United States, Canada, Central America, the Caribbean and South America.

The students come together (virtually) in seven regional working groups to discuss migration synodally. Earlier this month, Ms. Cuda spoke to 50 students in 19 Latin American countries in preparation for the event. Ultimately, the various groups of students will come up with questions that seven or eight students from different parts of America will present to the Pope. Loyola will host the “conference” via video call, which will be attended by Ms. Cuda and Pope Francis from the Vatican.

Ms. Cuda is close to Pope Francis and wrote the book Para empty a Francisco (understand Franz) and is considered in academic circles to be the woman best equipped to read the Pope’s mind. She is a protégé of the late Argentine Jesuit Juan Carlos Scannone, who promoted “theology of the people” and was one of Pope Francis’ principal teachers.

She was born in Buenos Aires and received her doctorate in theology from the Catholic University of Argentina. She studied political science with Ernesto Laclau at Northwestern University Chicago, specializing in research into the roots of populism. She has taught at various universities, including the Catholic University of Argentina and Arturo Jauretche National University in Buenos Aires, as well as Boston College and DePaul University in the United States. Ms. Cuda is also a counselor at CELAM’s social school.

Do schools in New Westminster have on-site childcare?