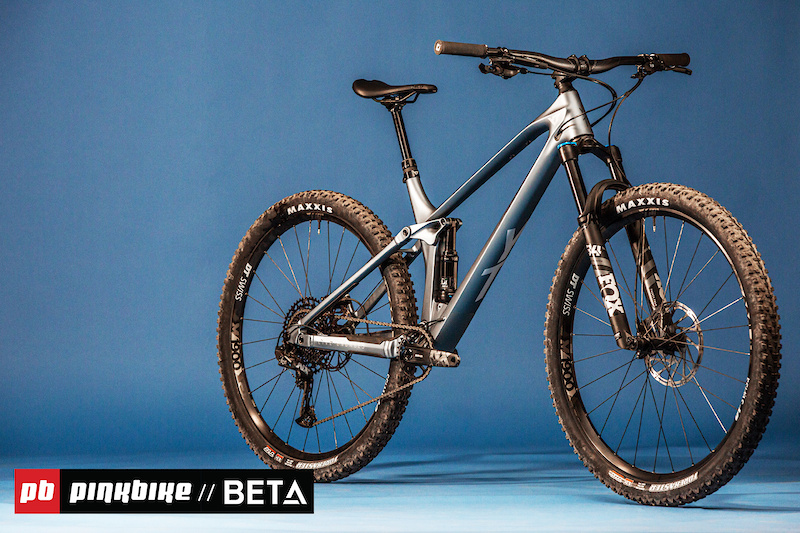 Words by Mike Kazimer; Photography by Tom Richards
The YT Izzo Core 2 was the only carbon-framed bike in this year’s Value Field Test, which is probably one of the reasons it was the lightest full-suspension model on test. For comparison, its 30.4 pounds weighs 2.5 pounds less than the Fezzari Cascade Peak and 4.5 pounds less than the Canyon Spectral 125. Granted, the frame isn’t entirely carbon—the rear end is aluminum—but still , that number on the scales is very reasonable, especially given the price tag of $3,399.

The Izzo’s frame has room for a water bottle in the front triangle, and YT offers their own line of Thirstmaster bottles with the FidLock mounting system. Luckily, it’s still possible to fit a standard bottle cage and use a regular water bottle, which is exactly what we did.

There are also two screws on the underside of the top tube for mounting a tube or tool holder. Cables are mounted internally through foam sleeves to keep things quiet, and there’s a molded chain guard to further aid in the quest for silence.

A not so well thought out frame detail is the space between the damper air valve and the frame. It’s a tight fit, meaning not all shock pumps will fit. YT supplies one with the bike to match, but if you already have a favorite shock pump, remember that it may not be compatible.

The geometry of the Izzo is modern, if a bit conservative compared to newer bikes. That’s not necessarily a bad thing, as long and loose isn’t always the ticket when it comes to making less rugged terrain fun. There are two geometry positions that can be controlled via flip-chip, but we rode in the low position for the entire test period. That gives a head angle of 66 degrees, a seat angle of 77 degrees and a reach of 472mm for a large size. The chainstays measure 432 mm on sizes S to L and 437 mm on sizes XL and XXL.

The Arizona desert is full of technical climbs where a botched attempt usually results in an uncomfortably close encounter with a prickly cactus or a sharp rock. I found this out the hard way on a particularly steep and spicy climb aboard the Izzo. I botched my attempt, thwarted by a tall, tombstone-shaped rock in just the wrong place. I broke free and put my right foot down, except there was nothing to wear—the edge of the trail dropped nearly six feet and lay below in a dry creek bed. Before I knew it, I was sliding down the steep incline, scraping rocks, dirt, and desert vegetation to try to break my fall. I ended up with a nice bruise on my shoulder and a few cuts and scrapes but thankfully nothing major. The bike also ended up with some cuts and scratches (sorry YT), but I was able to straighten a bent brake lever and finish the ride, which looked a bit worn.

Despite that unplanned crash, out of all the bikes tested, including hardtails, the Izzo was hands down my favorite climber. That’s why I was riding it when I fell – I had picked it specifically for this trail, knowing there were going to be some particularly challenging sections and I wanted to stack the deck in my favor.

The 130mm of rear travel is very well managed, with a great mix of traction and support from the Fox Float DPS shock. You can fully open the shock for maximum traction, set it in the middle position for a little more support, or in the firmest position for an almost completely locked-in feel. Regardless of position, the Izzo is a fairly quiet climber. It’s not insanely snappy, but that also means it’s not harsh and can absorb the shock of any square edges the rear wheel hits.

The 77-degree seat tube angle is good for a variety of terrain—it didn’t put too much pressure on my hands on flat sections, and it was easy to maintain traction on the steeper sections. This is also the lightest full-suspension bike in this test; it’s almost 5 pounds lighter than some of the others. That’s noticeable when riding back-to-back, making it a bike that encourages getting up and sprinting.

The Izzo isn’t a watered-down enduro bike, and that’s part of what makes it so fun to ride. It’s super easy to toss around, get airborne and aim for a little sniper landing. The suspension is very progressive, a trait that works well on a shorter-travel bike like this. I never bottomed out hard or felt like the bike was blowing through its travel too quickly.

At higher speeds it doesn’t feel as sure-footed as the Canyon Spectral 125, but it feels just right on the terrain it’s designed for. The Izzo is what I would call a thoroughbred trail bike, a bike where the ideal ride involves multiple climbs and descents rather than grinding up a fire road and bombing a steep trail back down.

Compared to the aforementioned Spectral 125, the Izzo’s head angle is 2 degrees steeper at 66 degrees versus 64 degrees, and reach is 14mm shorter at 472mm versus 486mm. This makes it feel nimbler and easier to maneuver through slower sections.

As far as components go, YT has put together a killer spec for the price. I have no complaints about the Fox 34 on a performance level, and the DPS damper worked flawlessly. The SRAM G2 brakes aren’t the most powerful, but they’re certainly an improvement over the Level brakes often found on bikes in this price range.

I’m not the biggest fan of the SRAM NX drivetrain, but I had no issues with this particular groupset. Even the shifting action seemed better than normal, possibly thanks to the use of the matchmaker clamp instead of the chunky plastic mount. The Maxxis Forekaster tires are a suitable choice for this bike, although we got two punctures – desert dwellers or someone on rockier terrain will probably want something with a thicker casing to avoid punctures.