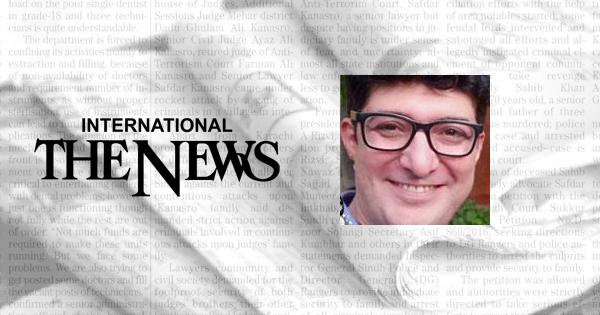 With the death of Rahimullah Yusufzai, a chapter of journalism in South Asia came to an end forever. I was fortunate to have known him and over the years I have had the opportunity to speak to him extensively in meetings. The life story of Mardan-born international journalist Khyber Pakhtunkhwa (KP) is full of events as great as the ones he wrote about.

When his father was captured by Indian troops in the 1971 war, he felt like he had died in battle. On the radio he heard that his father was still alive. At that moment he might not have noticed, but this medium became quite important in his career.

Although his father was from the lower middle class, he gave him a good education at various institutions such as the Convent School, Jhelum and the Military College Jhelum, Sarai Alamgir. In addition to sports, Rahimullah Yusufzai was good at acting in school. He once announced that his family mourned when he was not accepted into the army for medical reasons (poor eyesight). His family was unaware that otherwise fate had written for him and that he was born for a great cause.

Karachi, the city of the richest and poorest according to Rahimullah Yusufzai, was ready to accept him. For less than a hundred rupees he got a job as a (chowkidar) guard. He later went to the city’s renowned DJ Science College on a scholarship. As his family’s responsibilities increased, he accepted a job as a proofreader for The Sun in Karachi. There he had the feeling that he had found his goal. The reason for the love for Karachi was probably that the busy metropolis supported him most when the burden of practical life fell on him.

I once asked him: “Journalism is fine, but how did the idea of ​​going to Afghanistan come about?” He told me that Mujahid Barelvi, a well-known journalist from Karachi, came to Peshawar to meet him and to go to Kabul to conduct interviews. He thought if Mujahid Barelvi could go all the way from Karachi to Kabul, so should he. He made his first trip to Afghanistan and interviewed the then Afghan President Doctor Najibullah.

Rahimullah maintained close relationships with all Afghan leaders and advocates. Mullah Omar called him once to ask where Chechnya was. When Rahimullah Yusufzai asked why, he said that the country’s leaders invited Osama bin Laden and they (the Taliban) wanted to make arrangements for him. Rahimullah told him the airport had been bombed and destroyed. Then Mullah Omar said: “Okay, we can send him by bus.” Then Rahimullah realized that the mullah did not know that Chechnya was a far away country. Then he explained to him in a way that Mullah Omar could easily understand that they had to go to Iran first, then to Turkey and so on.

What made people listen to his broadcast on the BBC radio was Rahimullah’s honesty. Based on his findings, they would make decisions about Afghan politics and economics.

Regarding his life in the war zone, Rahimullah believed that the time he was present with the mujahideen in Nangarhar, Afghanistan and was bombed from above was probably the most terrifying moment of his life.

Once, Ahmad Shah Massoud invited him to Bagram. The war was raging in Afghanistan. A friend advised him not to visit the country. He did not go and was later told that a plot was hatched to murder him. It was supposed to destroy Afghanistan’s relations with Pakistan, for which the planners had chosen Rahimullah Yusufzai as the main target.

I vividly remember the time when the Peshawar Press Club spoke about the Afghan chapter of the South Asian Free Media Association (Safma). I argued that Afghanistan, being in Central Asia, is beyond the scope of the institution. Rahimullah Yusufzai immediately acknowledged this fact and spoke to Imtiaz Alam, a senior journalist and patron of Safma. He was good at not only tolerating criticism, but also acknowledging and correcting it.

Rahimullah inherited the spirit of public service from his father. He not only helped people from his hometown in Katling-Tehsil, Mardan, but also helped where he felt the need. Spirituality had a particular impact on his life, and that impact was borne by everyone he met. However, he was unable to give his family the time they deserved. But as a journalist through and through, he always considered the journalist community to be his family. Journalists in Peshawar now feel deprived of a kind family elder.

He was working on a book before he got seriously ill. This book was not published. We journalists who knew Rahimullah or at least followed his work consider ourselves blessed to have lived in the “age of Rahimullah Yusufzai”.

The author is a journalist based in Peshawar.