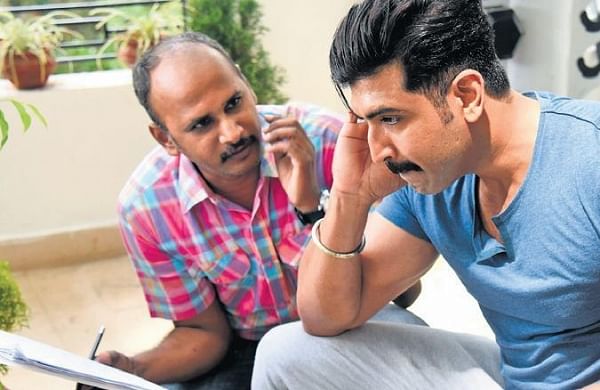 When did you realize that cinema was your calling?

I wasn’t even a cinephile by the time I finished school, but my father was and he often took us on tours. I got used to reading by my early twenties, and I remember how intrigued I was by that column in a weekly about the personal lives of directors. These stories were really inspiring and gave me the confidence to write poetry. I also remember seeing a piece of art made from broken bangles put together to spell the word “welcome”. It was the spark I needed to get into the creative field, I think; I think I took the greeting literally (smiles). When I started making my own artwork, my friends saw me and encouraged me to make films. I enrolled at the Chennai Film Institute and studied directing. A distant relative ran a security organization and one of his clients was Director Shankar Sir. I immediately took the position of security, simply because it was Shankar Sir. His former assistant Arivazhagan Sir discovered me and took me on board.

What did you learn from your directors?

Mr. Arivazhagan is simple, sincere and calm. He reads a lot and has a great collection of novels. We come from the same school of thought and this synchronization has made me travel with him for 13 years. Most directors are either creative or technically strong. Arivazhagan Sir is strong in both aspects. He taught me the meaning of ABC: artist, background and continuity. Mohan Raja Sir is extremely down to earth and friendly. He treats everything with a smile. He puts a lot of emphasis on story and dialogue. He even discusses ideas at midnight, and when an assistant was asleep he asked us not to disturb them. Both directors are open to suggestions from their assistants.

What’s the strangest or most memorable thing you’ve seen or done as an AD?

One of the first scenes in Kuttram 23 takes place on a rubbish dump. We shot this on the actual floor at Pallikaranai. It was difficult to stay there for an hour, given the stench, but we went with three call lists and shot 24 hours straight. We did this with a crew of 150 people. We took all possible security measures and wore boots, gloves and masks. Despite the restrictions, we finished everything as planned. It was an unforgettable experience and was made so special by the praise that Arivu sir showered.

What area of ​​filmmaking have you had a difficult time in but are better at now?

I took time to learn CG work. It has become a mandatory skill for a filmmaker. Only experience can teach what can and cannot be shot in a green mat. I learned this through videos and studied the work of other films. Arivu Sir’s films have a lot of CG work; so i learned a lot.

How do you feel about today’s cinema?

Both business and creative, Tamil cinema is one of the leading industries in the country. I don’t think any other industry attaches so much importance to content and new approaches.

What change would you like to see in Tamil cinema?

In the beginning only directors made films, and only about 10 percent of them wrote their own stories. Back then, a lot of emphasis was placed on writers and that is reflected in good films. I wish we would go back to that model as our cinema desperately needs more writers now. The number of directors who read to get ideas is limited. It’s nice to see directors like Vetri Maaran Credit Writer in his films. Even I want to make films out of novels written by the likes of Rajesh Kumar, Janakiraman, and Jayakanthan. Plagiarism has also become a huge problem these days and it’s pretty daunting to see it.

Who would be the dream cast and / or crew for your debut project?

I have a couple of scripts on hand, and Arun Vijay would be a perfect fit to play the male lead in one of them.

Students, don’t spend more than you need – discounts on iPads, laptops, and more can save you big bucks