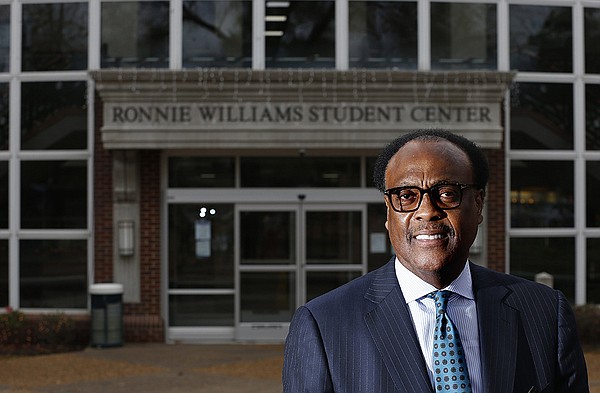 CONWAY – Ronnie Williams stood in front of a building on the University of Central Arkansas campus, smiling and looking up dazedly at the name carved in stone: Ronnie Williams Student Center.

“I still get the chills,” Williams said last month, shaking his head in disbelief. “I’m so incredibly humble about this recognition. To think for the board and the president that I did something to justify this type of recognition is humble and I’m just so grateful. I didn’t see this coming.”

In August 2021, the university’s board of trustees decided to recognize Williams three decades of senior management by renaming the campus student center in his honor. Williams retired last year.

Williams was the first black man to work at the university’s executive level. He began his tenure in 1980 as Deputy Dean of Studies and retired as Vice President of the Student Union and Chief Diversity Officer.

UCA President Houston Davis said in a statement emailed that Williams’ legacy of service, care and professionalism lives on in the university’s culture.

“It’s been a career full of accolades and accolades, and UCA was better off having Ronnie Williams on our team,” said Davis. “The true measure of his work and impact, however, lies in the lives of the tens of thousands of students he has touched and the futures he has influenced. Ronnie was a man of service and conviction during his time at UCA and has ours Better to leave university. ” when he found it. We are grateful to be able to call him a colleague and a friend, and his legacy will be felt long after he retires. “

In an interview, Williams was animated when he talked about building diversity programs at the university “from the ground up”. He was the first director of minority affairs for UCA, a division that started with just Williams and an administrative assistant and grew into numerous subdivisions and programs.

“I loved that position,” said Williams. “Programming this position was exactly my thing. And the students responded. We started with 75-100 students.”

Williams was originally hired to develop and implement programs to improve retention and graduation rates for color students.

He started the university’s minority mentoring program in 1991, an initiative that has grown exponentially since then and remains an important foundation for the university’s efforts to preserve minorities.

Initially, Williams recruited community leaders to mentor the minority students and deployed speakers to share their experiences and knowledge.

As part of today’s program, senior high school students are being trained as freshmen mentors who not only help them find their way around campus, but also introduce them to college life, both academically and socially. The mentors help the new students with health problems, life skills, learning habits and interpersonal skills.

Williams quickly recognizes the success of the diversity programs and calls several team members on the way. He credits Angela Webster, now the University’s Chief Diversity Officer, Assistant Vice President of Institutional Diversity and Inclusion, and Associate Professor of Leadership Studies, in particular with developing the University’s Diversity Strategic Plan.

“I held the title, but I assure you that was all her,” said Williams. “The plan requires input from every segment of our campus. Diversity has become a part of our core values.”

The road to implementing diversity on campus has not always been easy, Williams said. He encountered resistance early on when he suggested making campus-wide diversity training for students, lecturers and employees a prerequisite.

“When you talk about diversity, the first reaction I think was years ago was whether or not you wanted to make someone feel guilty,” Williams said. “It took a few years to finally get it to the point where everyone came up with the idea, including the then president. We had a couple of incidents on campus at the time that I thought necessary. So we went to the president and talked about the need for diversity training on campus and, like I said, it was a slow walk. “

“I am grateful to Dr. Houston Davis for making a number of remarks from the very top, and certainly to Tom Courtway before him for believing that diversity is something that should be part of the structure of this institution,” he said.

Williams’ mission of diversity extended beyond campus and into the Conway community. He was the first black chairman of the Conway Chamber of Commerce, where he received the Guy W. Murphy Distinguished Service Award. The award is the Chamber’s highest recognition, and Williams was recognized for his inclusive, open leadership and leadership with the UCA and toward people and organizations in Faulkner County.

The UCA created the Ronnie Williams Endowed Scholarship to support full-time students who are actively involved in a student organization, preferring students in leadership roles with a GPA of 2.5 or higher.

Williams was vice chairman of the Arkansas Educational Television Commission and was also a member of the Faulkner County Shelter for Missed and Battered Women, the Arkansas Supreme Court Committee on Professional Conduct, and the Arkansas Community Foundation Board.

THE DEATH OF THE BROTHER

Williams said he enjoyed his retirement with his wife, Connie – who he met in high school – their two adult sons and five grandchildren.

He recently completed a project that has long been on his plate: the story of the death of his brother Marvin Williams in 1960.

More than two decades after his death in 1960, the then governor. Bill Clinton appointed a special grand jury to determine. Mullenax and Iberg were charged with first degree murder for beating Marvin Williams to death, but were acquitted in 1985 by an all-white jury.

The jury was not shown an autopsy report stating that Marvin Williams died of a brain haemorrhage caused by a fracture in the back of his head or the test that did not find alcohol in his blood.

Ronnie Williams has spent the last 5½ years writing a book about his family’s case and experience. It should be released this month.

“It was very hard to write,” said Williams.

Williams said he plans to remain active in the Conway community and looks forward to seeing growth at the UCA among his successors – Webster as chief diversity officer and Robin Williamson as president of student affairs.

“In that position, things go up and down. Every Thursday, Friday, Saturday night, the student activity train is going to come off the rails. You just never know,” Williams said. “My advice is to keep hooking up, stay committed, not take yourself too seriously, and always put students first.”