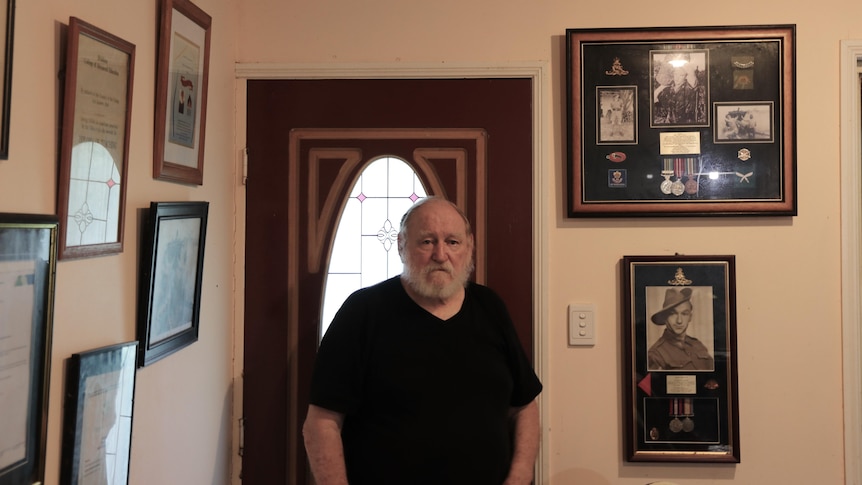 The second Malaysian emergency veteran reflects on a little-known conflict, the communist insurgency

It’s the first thing that strikes you when you drive to Jon Eaton’s home in Sarina. A large wooden sign written in a language not many would understand.

Mr Eaton fought in the jungle for 12 months during the Second Malayan Emergency, also known as the Communist Insurgency, in Malaysia.

He said you probably wouldn’t know about it because it happened at the same time as the Vietnam War.

The second emergency is said to be one of the lesser known effects of the 1968 developments in Vietnam and China.

The second state of emergency did not end until 1990 on all fronts.

“When we were in Malaya, all of our vehicles and guns had a white kangaroo painted on them…them [Malays] had no idea what a kangaroo was, so they thought it was a walking rat.

“They called us the warriors of the walking rat.”

A life worth writing about

Being abandoned at a train station as a baby, surfing with Midget Farrelly, working on farms, building boats and bathtubs before crippling his hand and becoming a teacher; Jon Eaton is now writing a book about his life.

And through a life of pain and suffering, he remains immensely proud of his service to his country.

Mr. Eaton remembers the jungle vividly; surrounded by tigers, orangutans, the buzzing of mosquitoes and the chuckling of scorpions.

He spoke of a lingering twilight and darkness that came all at once, like someone had flipped a light switch.

“I was upset when I came back from abroad,” he said.

“I didn’t know it at the time, but I was suffering from post-traumatic stress.

“I hated clearings… when I came back to Australia I couldn’t walk through a park and I still have problems.”

“My life was put on hold”

He clearly remembers the moment when he found out his time in the conflict zone was up.

“I was out in the jungle and an officer came and patted me on the shoulder and said you’re going back to Australia,” he said.

Two days later Mr. Eaton was back in Sydney.

“In my eyes, all these guys were still in the jungle,” he said.

“For 40 years they were still there and I didn’t go to Anzac Day marches … because they weren’t done yet.”

In 2007, Mr. Eaton saw a reunion advertisement in the newspaper for his battery arranging a return trip to Malaysia.

“All of a sudden people from all over Australia were calling and saying we were looking for you,” he said.

“I had some really bad memories and really didn’t want to leave.”

However, Mr. Eaton was granted some rest in reuniting with his comrades.

“You don’t recognize her, but her voice doesn’t change,” he said.

“I was able to start living because my whole life was on hold… by the time I met them, they were out of the jungle.

A member of the “black sheep”

“I was the only person in my neighborhood who had a medical and got through it … all my buddies chewed soap because it made their blood pressure silly,” he said.

Mr. Eaton was quickly identified for his physical abilities and asked to become a physical training instructor.

“You wouldn’t know if you look at me now, but I used to be pretty fit,” he said.

But those above wanted to keep him in Australia to train recruits.

“I said no… there’s a war on, I don’t want to spend my whole two years training recruits in kapooka, I want to go overseas.”

“They took all the people who didn’t fit anywhere else and put them in there,” he said.

He said there were two units and they had to decide who to send to Vietnam and who to Malaysia.

As fate would have it, the other unit went to Vietnam and was in the Battle of Coral.

Consequences of the armed conflict

Mr Eaton said after seeking professional help he realized he had probably struggled with post-traumatic stress disorder for most of his life.

“It’s nightmares, you get flashbacks and you remember things — never well,” he said.

“You get massive anxiety attacks, vomiting, shaking, you can’t calm your head and you can’t sleep.”

Mr. Eaton has seen a number of psychologists since returning from his mission.

“You learn what the triggers are and how to deal with them… things like visualization and mantras,” he said.

He also traveled to Townsville to see a psychiatrist.

He remembers the worried look on the taxi driver’s face when he gave him the address.

If you or someone you know needs help:

Mr Eaton said there are only two doctors at the practice: one for brain tumors and one for mental health issues.

As he sat down upon arrival, he began to wonder what category the people around him belonged to.

Then a mosquito started buzzing, causing his eyes to widen and his head to twitch suddenly.

The sign at the entrance to Mr. Eaton’s property is his way of telling the story of a little-known conflict and paying tribute to his comrades, the Walking Rat warriors.