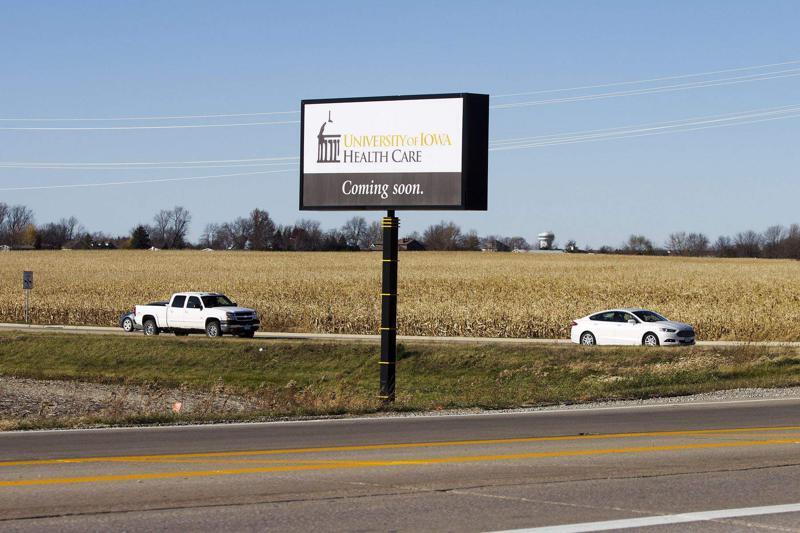 Traffic will pass a sign announcing the upcoming University of Iowa Health Care Services campus at the intersection of Forevergreen Road along Highway 965 on May 16, 2011 in North Liberty.

NORTH LIBERTY – After a stabbing rejection in February and another unexpected delay in the summer, the University of Iowa Health Care’s revised application to build a new $ 230 million facility off Interstate-380 in North Liberty is given a second chance before the State health facilities have council on August 31st.

The UIHC resubmitted an application to build “one of the most expensive proposed projects in the history of the Council” on May 20, after the group of five on February 17 – after seven hours of testimony that included both support and rejection of the project – had just voted 3 -2 to deny UIHC permission to create.

Representatives from Mercy Iowa City and Mercy Medical Center in Cedar Rapids were among the 53 who filed the state objection letter against the UIHC project after its first application last year.

Since UIHC filed a revised motion in May to clarify the needs and intentions for a proposed 48-bed facility on the corner of Highway 965 and Forevergreen Road – while those worries are allayed, UIHC would Shut down community health customers and smaller facilities – the state has received over 80 letters of objection, including from critics who have voiced their concerns for the first time.

It has also received more letters of support for the project – 69 versus 27 the first time.

Arguments for and against

“Our residents have to wait for services because the UIHC has been overwhelmed for so long,” wrote Steve Roe, executive director of Oaknoll Retirement Residence, in support of the UIHC proposal. “Our residents cannot stay in the emergency room for 24 to 48 hours while they wait to be admitted to the hospital.

“They are all older adults with complex medical diagnoses and comorbidities. Some of them live with dementia and cannot stand the hustle and bustle and loud noises. “

Those who wrote against the project include local doctors, clinics, and hospital systems – such as Mercy Iowa City, UnityPoint Health, based in West Des Moines, and Wellmark Blue Cross Blue Shield.

“After reviewing the data and talking to several health care executives who asked us to comment on this motion, Wellmark submitted this objection letter to the motion,” said the Wellmark letter signed by Vice President Tom Newton. “Wellmark has a long history of evaluating facts and providing letters of support or objection to the council sparingly, depending on the impact on our members and employer customers.”

But he added, “Wellmark is concerned about the proposed North Liberty hospital as the application and data clearly suggest it would increase healthcare costs.”

In his letter, Wellmark accused the UIHC of creating “costly overcapacity in health care” with its proposed project and of requiring 450 additional health workers to fill the room, likely from “existing health organizations struggling to retain their current workforce “, come.

In addition, Wellmark said, “UIHC recognizes that health care in an academic medical center costs more than the same care in a community hospital.”

UIHC advocates and leaders have argued that their campus needs more space to accommodate the growing number of patients who are too sick and complex to care for in the community.

“Iowa is currently facing an unmet demand for access to highly specialized, coordinated care that is expected to only increase,” reads many of the letters of support the state received in response to its request for public records and then submitted to The Gazette.

After the council rejected UIHC’s application in February, the Steindler Orthopedic Clinic announced it had bought 34 acres on the same North Liberty exchange that UIHC wants to build on and plans to develop there.

Resignation of the Council

UIHC’s new motion was due to receive a second council hearing on July 15, until Councilor Carol Earnhardt – one of the three who voted against the project – resigned “with immediate effect” on May 24, four years ago their six-year term should expire.

While the state still accepted letters of support and objection from everyone affected by the project, it postponed consideration of the high-profile UIHC proposal until the governor could appoint a new fifth council member – possibly to aid decision-making.

On July 20, Governor Kelly Blackford – a Republican of Marion – appointed into the vacated term, which expires on April 30, 2025. According to her LinkedIn profile, Blackford earned a decade of bachelor’s and master’s in business administration from UI and has since served in various managerial and director positions at Rockwell Collins and Collins Aerospace.

The section of the Iowa Code that establishes the council and its powers requires five council members who are broadly representative of the geographic regions of the state. No more than three can belong to the same political party, and all of them must have “shown, through previous activities, a vested interest in the planning and delivery of health services”.

The State Health Facilities Council website does not describe how each member expressed such an “informed concern”. And state officials have not yet provided The Gazette with the application materials for the councilors.

There are no Democrats on the current council – although there are only three registered Republicans according to the state database. The other two include an independent and a libertarian.

Linn County’s Blackford joins other councilors from Scott, Polk, Pottawattamie, and Cherokee Counties. State law prohibits them and their spouses from being health care providers or indirectly participating in the delivery of health care while serving on the council.

Harold Miller – the chairman of the council who voted in favor of the UIHC proposal – is a retired family medicine practitioner in Davenport with the Genesis Health Group. He completed specialist training at Mercy St. Luke’s Hospital and Broad Lawns Polk County, among others, and earned a degree in medicine from UI.

Vanessa Miller reports on higher education for The Gazette.

Governor Kate Brown signed a law that allows Oregon students to graduate without demonstrating that they can write or do arithmetic. She doesn’t want to talk about it.