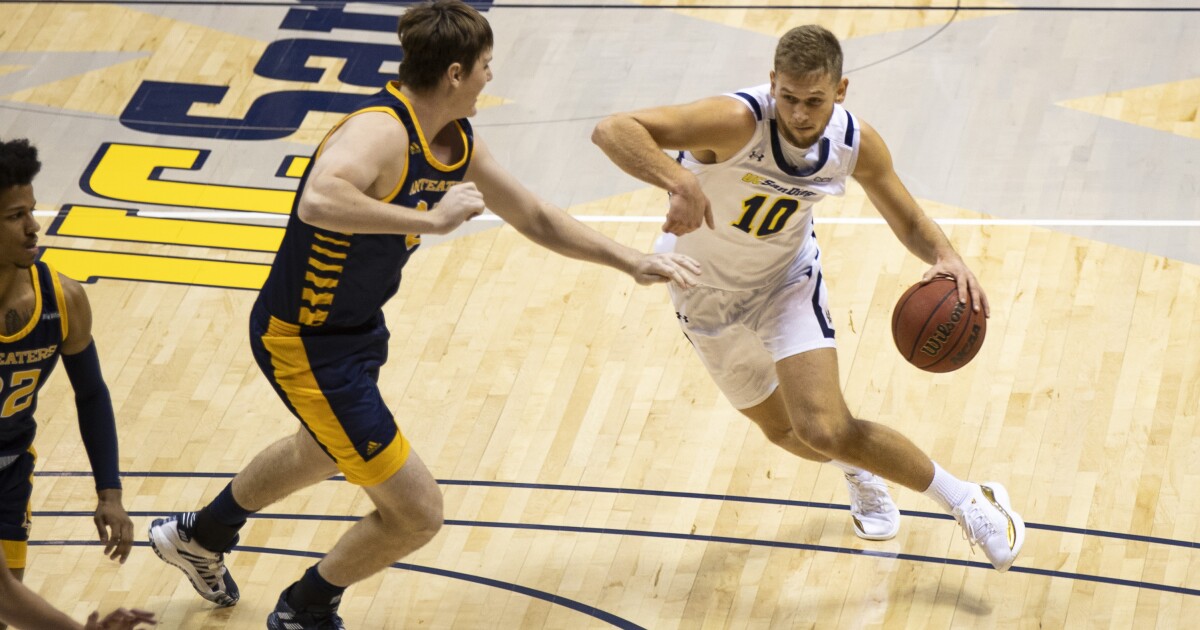 Tritons grow into Division I tires

Moving from NCAA Division II to Division I basketball can, under normal circumstances, result in a precarious jump.

Throw in a global pandemic and everything related to it?

Well, that can be a bit of an undersized point guard trying to hit three-time NBA Defensive Player of the Year Rudy Gobert.

And yet, after years of planning to transition to Division I and several months of working on COVID-19, the UC San Diego Tritons are finally taking their first real steps toward dancing with the big boys.

Coach Eric Olen’s team, a temporary member of the Big West Conference, is playing an exhibition game tonight at Loyola Marymount of the West Coast Conference, opening the regular season on Tuesday at Cal of the Pac-12, and welcoming George Washington of the Atlantic 10 on Nov 13 in the RIMAC-Arena.

Under provisional status, Tritons games will not count towards the Big West rating and will not be eligible for conference or NCAA tournament games until the 2024-25 season. But being able to play a real schedule in front of real fans?

It’s been a long time.

“This is exciting because we feel like this is our first step,” said Olen, who led the Tritons to a 159-56 record and three California Collegiate Athletic Association regular season titles in eight seasons at the Division II level . “And we have a lot of the guys who will go a long way in getting this to where we want it to be.”

Olen’s program got a taste of Division I life last season, going 7-10 overall and 4-8 against Big West opponents, but several games were canceled along the way and the gyms were fanless.

Toni Rocak, a 6-foot-9 forward who was the Tritons’ leading goalscorer (12.9 ppg) and rebounder (5.3 RPG) last season, is returning for his senior season, as is the second guard and Torrey Pines High School alum Bryce Pope. which averaged 9.7 ppg.

Olen also added a four-player freshman class – his first that could be available for the full jump to Division I status in four seasons.

The Tritons led the Big West with 11.1 three-pointers per game and fifth nationally last season with 29 three-point attempts per game, and that shot will continue to be a staple of the team’s offense.

“It’s a very player-friendly style,” said Rocak, who played for the Swiss national team after his first season at UCSD this summer. â€œThere has to be a lot of trust between us. Everyone plays selflessly and that’s one of the keys – to move the ball and find the open guy for the 3 and also to know when to drive. “

Rocak was born in Zagreb, Croatia, grew up in Geneva and joined UCSD after a stay at Division II Regis College in Colorado.

Olen said moving to Division I has already opened new doors for recruiting and his blueprint is to find seasoned players no matter where they come from.

“We’re turning all the stones around to find the right thing for us academically as well as athletically,” said Olen. â€œWe want guys who fit our style of play. I mean, this is where the game is going on every level. Clever. Competently. Hard. That is our recipe and we want to lean on it. “

Where does the program fit into San Diego’s basketball culture? Only time can tell.

The Tritons will receive NAIA San Diego Christian on November 16, pay a visit to San Diego State on December 22, and will not compete against USD this season despite the schools discussing a future meeting.

To grab local attention, the Tritons can offer engaging style, affordable ticket prices – $ 10 for home opener against George Washington – and the chance to see a program take its first small steps into the big time.

Everything gets a little more real tonight and Tuesday at Cal in a game televised by Pac-12 Network.

â€œI see it as a way to let the program grow,â€ said Rocak. “It’s about establishing a good culture within the group and also a culture of winning.”

Carter is a freelance writer.

Uses of this branch: