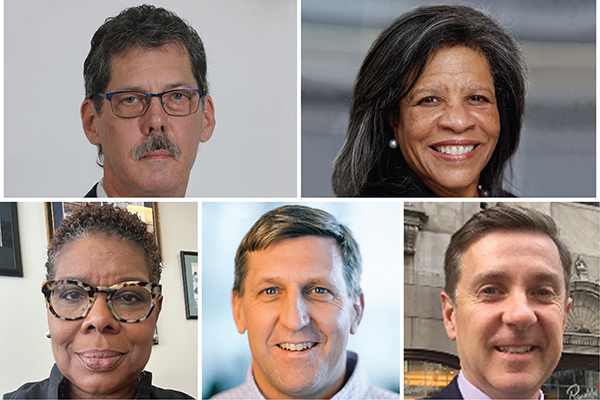 The University of Dayton has appointed Rick Omlor, retired President and CEO of YSI Inc., as Chair of the Board of Trustees for a three-year term and added three new Trustees effective July 1.

Omlor graduated from UD in 1979 with a bachelor’s degree in mechanical engineering and has served in a variety of board positions, including serving as chairman of the board of onMain, the university’s joint project with Premier Health to redevelop the county’s former fairgrounds.

“It has been my pleasure to serve on the University Council in various capacities over the past 11 years,” said Omlor. “I look forward with gratitude to the honor and privilege of serving as Chair of the Board of Trustees as we move forward together during these unprecedented, challenging, but exciting times in our future.”

Omlor has served on the board since 2011, succeeding Mary Boosalis, retired President of Premier Health. Boosalis, who completed 12 years as University Trustee, including three years as UD’s first female Chair, was appointed Trustee Emerita. Also named trustees emeritus were Bro. Thomas Giardino, SM, who served on the Board for 23 years; Thomas Holton, who served nine years; and Joseph Spadaford, who completed 10 years.

Debra Plousha-Moore, Director of Plousha Moore Group, has been appointed Second Vice Chair of the Board. Plousha-Moore earned a Masters in Education from the university in 1989 and was Associate Dean of Studies for over 10 years. She and her husband, retired USAF Col. John E. Moore, Jr., have two sons, both UD graduates.

Plousha Moore Group (PMG) is a boutique consulting firm with more than 35 years of experience in executive level leadership and consulting services. Plousha-Moore has served in progressive leadership roles in the healthcare industry, including Executive Vice President and Chief of Staff for Atrium Health.

“The university is truly blessed to have strong and stable board-level leadership,” said University President Eric F. Spina. “We look forward to working with our new leadership and trustees as we take the university to new heights. At the same time, we are deeply grateful to the services of our retired trustees, who have provided exceptional insight and guidance on the opportunities and challenges the university is facing.”

Three new Trustees join the Board for three-year terms:

Terri Lee Freeman (’81, Bachelors Journalism/Communication Arts); Executive Director of the Reginald F. Lewis Museum of Maryland African American History and Culture and Past President of the National Civil Rights Museum (both are affiliates of the Smithsonian Museum at the Lorraine Hotel in Memphis, Tennessee). Freeman was active at UD in the Epsilon Chi chapter of the Alpha Kappa Alpha sorority, which they promised in 1979. She also earned a master’s degree in organizational communications from Howard University. She has received a Distinguished Achievement Award from the UD Alumni Association.

Michael R. Herr (’90, Bachelor of Accounting); Chief Financial Officer of SRAM, one of the world’s largest suppliers of components to the bicycle industry. Mr. and his wife Katie (’94, Bachelors Elementary Education) have one daughter who graduated in May with a Premed degree and a second daughter who is currently at UD, also Premed. The Herrs have served on the executive committee of UD’s Parent Leadership Council and Michael is an advisory board member for the School of Business Administration.

Cary J. Bull (’90, Bachelor of Accounting); Vice Chairman and Managing Partner of Deloitte’s Accounting & Advisory Transformation Services Group. Over the past 32 years, Stier has held a variety of prominent leadership and strategic client positions. Cary and his wife Sheila (released in 1990) have three children; One daughter graduated from UD in May with a degree in psychology. The Stiers are board members of UD’s Parent Leadership Council.