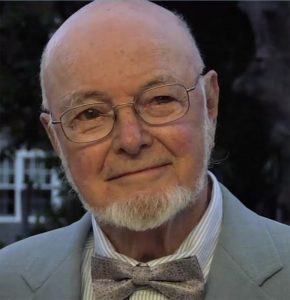 Don Lyons died of kidney disease on August 24, 2021 at the age of 94. Even with only his wife Joni, his nurse Fiona and the cat as an audience, Don continued to sing until the end. As Joni said: “Don was always a class – in life and in death.”

Don was born in Greenfield on July 15, 1927, and grew up in Floral Park, NY. His school activities were punctuated by music and baseball.

While studying at Bowdoin College in Maine, he celebrated his lifelong enjoyment of music by joining the Meddiebempsters, an a cappella double quartet that toured domestically and internationally. Finally, he led the group.

Don postponed his graduation by joining the U.S. Marines shortly before the end of World War II. After he was stationed in China for the duration of his service, he returned to Bowdoin, where he did his bachelor’s degree.

Don married Helen Herrick and they became the parents of Mark and Laurie. Helen died after giving birth to her second child. Don and Hope Dixon married a year later and welcomed children Christopher, Naomi and Beth.

After receiving his Masters at the Episcopal Theology School, Cambridge, the original parish of the newly ordained Pastor Don Lyons was in New Hampshire. In 1958 he became a canon of St. Paul’s Cathedral in Boston. He then became Archdeacon of the Diocese of New Hampshire. He was known for his intelligence, deep faith, and ability to lead. But his heart had always been much closer to the daily activities of the ministry, and he wanted to return to church life.

Don and his family moved to the Vineyard in 1966. He was the rector of Grace Episcopal Church in Vineyard Haven for nearly two decades and offered gentle and forward-thinking leadership. The 1960s was a decade of transformation and manifestation everywhere. As an activist, Don was deeply involved in civil rights and peace movements. At Grace Church, Don was an advocate of change and did not hesitate to embrace things that might challenge “the way it always was.”

His innovations included writing, producing and staging biblical musicals for the 35 children in the church school. Their active participation has brought their teachings to life in a way that no other art form can. Therefore, it was an easy decision for Don to welcome the newly founded children’s theater of the Island Theater Workshop under the direction of Mary Payne from the summer of 1968 to sing, dance, talk and create in the Grace Church Hall and have been an integral part of this troupe for many years showed their talent and beautiful voices. Not only was Don a kind and compassionate pastor, but along with that lovely singing voice, he was a natural actor and quick learner – “born to step on the boards”. From Shakespeare to Gilbert and Sullivan, he provided the Vineyard audience with entertainment for decades. He played so many roles that it would take a trip to the Gazette archives to list them all. From the deepest dramas to the exhilarating vitality of musical comedies, Don has always been a happy addition to any ensemble, professional and perfect on stage and a wonderful support for all actors and crew in the starting blocks.

After decades as a church leader, he retired and became the sports editor of the MV Times, no surprise given that he was a Little League referee for many years. Don wrote for The Times until he retired at 85.

In 1991 Don married Joni Merry. Over the past three decades, their warmth and joy in each other have been palpable and contagious. How people enjoy their casual playfulness and their compatible humor.

Don’s desire to create something new led him to plant a garden on their property in West Tisbury. He found out that there was already a “garden” – made of huge rocks. He created a fulcrum and lever to remove them almost single-handedly. Since he had found himself with a huge collection of stones, his curiosity aroused him to think about what he could do with that bounty. He built a wooden sledge to carry the stones and built stone walls around the property and topped the project off with building a round stone house with a roof just to see if he could.

As a humanist, he was always interested in how people lived and helped one another. This interest took him and Joni around the world and traveled to 60 countries, mainly to those that are not normally visited by many tourists. Anyone who knows the island knows that our Vineyard community is diverse. As a pastor and friend, Don offered discreet help and gentle kindness to many in need. He always exercised patience and was a teacher to many. Always a compassionate and caring advisor, Don has supported the island recovery community and served on several boards of directors including Martha’s Vineyard Community Services, Island Theater Workshop, and Camp Jabberwocky. A round window by the artist Barney Zeitz was let into the parish hall in honor of Don’s commitment and work in Grace Church.

Don had died before his sister Alice Eckhardt and his brothers Charlie and Eddie Lyons. He is survived by his wife Joni Merry; his children Mark Lyons and partner Cindy Walker from New Hampshire and Laurie and husband Russ Redgate and grandsons Michael and Christopher from Marstons Mills; Christopher Lyons of Florida; Naomi Lyons of Arizona; Beth Lyons of Maryland; Jennifer and husband Howie Marlin of Vineyard Haven, grandchildren Sam and Hannah, and great-granddaughter Olivia Marlin; Jessica Williamson and husband Alex Czarowicz and grandchildren Annabella, Sophia and Thomas from Cambridge; Greg and wife Leslie Williamson of Vineyard Haven and grandsons Andrew and Ellie Williamson. Don also survives Fiona Kaweesa, his beloved and ubiquitous nurse from Uganda. She was supported by the Cape and Islands VNA Hospice.

A memorial service will be held at Grange Hall in West Tisbury on Wednesday September 1st at 5pm. Mask is compulsory.

University of Georgia is offering $ 1,000 incentives to vaccinate students and staff