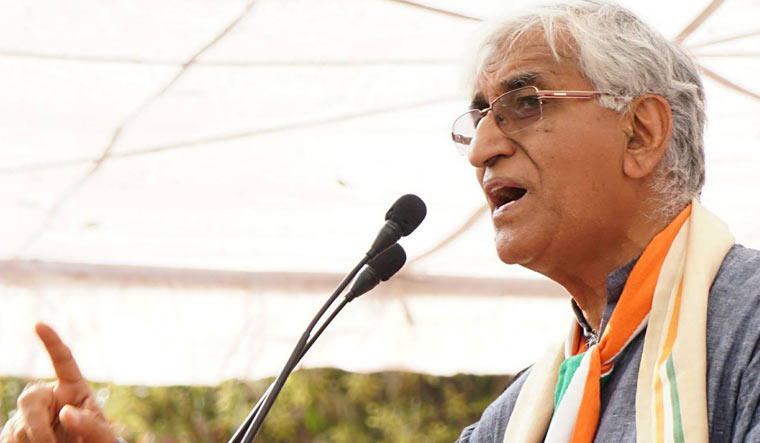 Another political storm hit Chhattisgarh on Saturday when senior cabinet minister TS Singh Deo resigned as panchayat and minister for rural development, expressing deep displeasure at being sidelined in the ministry’s work.

However, the Prime Minister said in his four-page resignation letter that he would continue to work in the other departments under his authority “to the best of his ability and with dedication”. Singh Deo is also Minister of Health, Medical Education, Business Tax and 20 Point Program Implementation.

There was no immediate word that the resignation of Chief Minister Bhupesh Baghel, to whom it was addressed, was accepted. However, the development gave the opposition BJP ample scope to attack the Congressional government with anger.

Singh Deo, who submitted his resignation from his hometown of Ambikapur, was unavailable. Also, there was no immediate reaction from Congress on the matter.

Singh Deo, who is viewed as a naysayer by Prime Minister Baghel, particularly on the issue of the alleged formula for apportioning the Prime Minister’s posts, continues to show his displeasure and resentment in various ways – causing political turmoil in the state.

His displeasure and consistent moves prompted the Congressional High Command to repeatedly call him and CM Baghel to Delhi in August-September last year and it was not until Baghel paraded in support of the MLAs in Delhi to weather the storm.

Most recently, Singh Deo relinquished responsibility for one of his key departments, claiming he had stepped aside and surrendered himself as minister. The four-page letter repeatedly cited cases where, although he (Singh Deo) personally called or wrote to the Prime Minister, his recommendations, requests and suggestions were ignored.

Singh Deo cited specific cases such as the failure to allocate funds to build 8 lakh houses for the poor under Prime Minister Awaas Yojana despite his repeated pleas to the CM. Despite being mentioned in the Congressional election manifesto (of 2018), not a single PM Aawas home has been built under the current administration, he said.

The minister then mentioned that while the departmental minister was given discretionary powers in allocating funds under discretionary rules, a committee headed by the chief secretary was set up to make final decisions also on the minister’s recommendation. Despite his repeated objections, the system was not changed and Rs 500 crores of funds could not be used for the works recommended by MPs.

Singh Deo also confirmed speculation about his differences with the Chief Minister over the implementation of the Panchayats Extension to Scheduled Areas (PESA) rules. He said in the letter that it is probably the first time that some important points of the draft rules of procedure have been changed in the Précis cabinet (for the cabinet’s approval of the rules of procedure). “The minister responsible has not been trusted to make these changes and this will set an unhealthy precedent,” Singh Deo said, adding that he had personally written to Baghel on the matter.

The resignation letter showed that the minister was extremely upset, despite his clear and repeated objections to the government’s decision to reinstate Assistant Program Officers (APOs) of the Panchayat department following a labor assistants’ strike three months ago. Singh Deo said that the role of APOs in a conspiracy to initiate the strike is clear and this has huge implications for the work of the Mahatma Gandhi National Rural Employment Guarantee (MNREGS) and the payment of Rs 1,250 crores wages to the workers have. Despite his various serious objections, the APOs who were fired after the strike were reinstated in the same post, which Singh Deo said was totally unacceptable to him.

“Considering the above important points according to the principles of the jan-ghoshna patra (electoral programme), I do not believe that, in the current situation, I am able to fulfill the department’s objectives with the required commitment. Therefore, I am resigning from the Panchayat and Rural Development Department. I will continue in charge of other departments assigned to me by you with full ability and dedication,” Singh Deo said at the end of his resignation.

Chhattisgarh BJP chief Vishnu Deo Sai attacked the prime minister, saying that the move by a senior minister like Singh Deo to give up heading a department was an example of Bhupesh Baghel’s dictatorship. “The CM does nothing itself, nor does it allow its ministers to do anything. Singh Deo should also resign as health minister as he is unable to properly do the work of this department. CM Baghel is also trying to take over the organization of the Congress and recently the fight between him and State Congress Chairman Mohan Markam had come to the fore. Now the battle between Baghel and Singh Deo is on the street,” Sai said in a series of tweets.

Opposition leader Dharamlal Kaushik said in a tweet: “Everyone knows that TS Singh Deo has resigned from one of his departments. It makes it clear that all is not well in Congress.”

Former Minister Rajesh Munat tweeted: “It’s better to quit the department if you can’t work. Singh Deo has shown great courage by dropping his charges. Bhupesh Baghel ji, you too are not able to control the government, you should also show some courage,” he said.