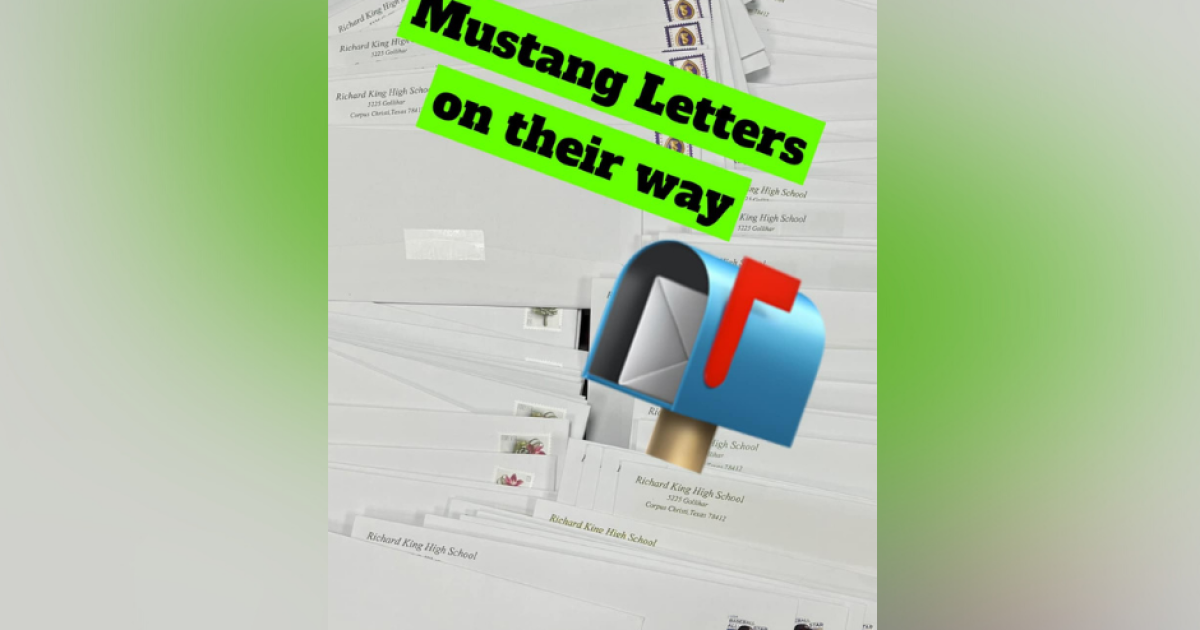 CORPUS CHRISTI, Texas – Some students at King High School recently found a nice surprise in their mailboxes after principal Prudence Farrell urged her teachers and staff to use other means to reach students.

As the end of the school year approaches, Ferrell thought it would be a great idea for her staff to give students words of encouragement as a final push to end the year strong.

However, instead of texting, emailing, or making phone calls, she asked her employees to put pen to paper and send letters through the mail.

“Each staff member wrote three letters to three different students (of their choice) — each staff member also wrote a letter to another staff member,” Ferrell said. “And not just from their teachers; it’s every staff member on campus who has done so. This includes paraprofessionals, administrative assistants, consultants.”

A total of 300 letters were sent to students last week as staff also received letters from their peers.

Ferrell said she came up with the idea after receiving a letter from her daughter’s teacher a year ago.

“And when I got that letter from her teacher, I was like, ‘Wow, I really needed that,'” Ferrell said. “And so it just got me thinking, you know, there’s a lot of kids that need that.”

Ferrell said she started the initiative at Hamlin Middle School last year and decided to do the same at King this year.

“I feel truly blessed to have a principal who encourages positivity on campus and encourages teachers to write letters not only to students but to each other,” said science teacher Erica Wakefield. “Especially at the end of the year; all of us students and staff just try to get through to the end. A positive letter can really help students and teachers stay positive and motivated to the end.”

Wakefield said she genuinely believes the letters help students realize that their teachers genuinely care about them.

“Students won’t be able to learn or absorb information if they’re in a school where they don’t feel safe or where they just don’t have a connection with their teachers,” Wakefield said. “And (these letters) really help fill that gap.”

KHS Junior Davie Bishop said when she first saw the letter in the mail, she didn’t know what to make of it.

The stress of her new job and keeping up with classes and extracurricular activities leading up to her senior year has been tough, she said.

But once she started reading her secretary’s words in elementary school, she felt like she could move on.

“It was nice to have someone who would take the time to write a handwritten letter and post it to my address,” Davie said. “Especially because it was addressed to me. Not even to my parents, they addressed it to me. I’ve heard from a few different people that they really enjoyed having them and mostly because they didn’t understand why they got mail either.”

Like Davie, Holly was surprised to receive her letters.

“It’s just really cute,” said Holly. “And it seemed a lot better than getting a text message or an email or something. We can hold him for a while. I feel like it’s more meaningful because I know that if I’m having a bad day I can go back and look at it. Or maybe in a few years I’ll go through some stuff and see that letter again.”

Both Holly and Davie agreed they hope the school continues to do something like this so others can benefit from the kind words.

“Writing the letters is just as powerful and positive as receiving them,” Farrell said. “I mean, when you radiate good energy, good energy comes back to you.”