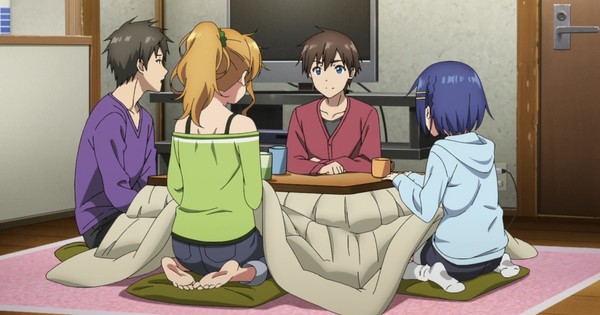 It’s hard to imagine Make our life new! surpasses his last episode. But then I remember we only just got half of it cour, and that’s plenty of time for this conspiracy, to possibly tear my heart out, make me cry, or do both … for better or for worse. In any case, episode 6, “We’ll Find It Out,” is another solid post for the series, following a school festival episode with some character antics, character growth, and more time with Tsurayuki that we haven’t spent much Time with.

One of the things that I have come to appreciate Make our life new! is how much it has put aside the magical realism aspect of Kyoya traveling back to 2006 to offer a realistic portrayal of college life. That includes the drawbacks, such as overwork, which unfortunately is the norm for most workaholic societies in Japan. (Of course, this is a symptom of most capitalist societies, and not just an indictment specifically against Japan) This becomes the central plot for Episode 6: Tsurayuki’s Struggle with Exhaustion and Worsening Health, and Kyoya’s determination to help him find a solution.

It makes for quite a compelling storyline, in large part because it’s nice to see a healthy male relationship where there is no competition, just caring and serious friendship. Kyoya and Trsurayuki are Rivals, but they’re the kind of rivals who push each other to do better than push against each other … until Tsurayuki starts fraying. This leads to the scene where Tsurayuki opens up, making for one of the most emotional moments on the series yet.

So far, Tsurayuki has been kind of a background character compared to Kyoya, Eiko, and Nanako (admittedly, Aki too), and I think it’s important that we dedicate an entire episode to him, although I have to admit I expected Kyoya to do some overhaul has to do, especially since he (and the viewer) still do not know exactly how his return to the past works. I have a lingering fear that in the present, Kyoya will blink and wake up and somehow have to figure out how to turn back time. I doubt it’s going to happen, but I just can’t get rid of the slightly unsettling feeling that it’s a very real plot point across the board.

Things with Tsurayuki do not fully resolve this episode; What we’re getting is a lot of setup for bigger resolution, especially with the cliffhanger this week. I definitely have a good gut feeling that things are going to work out in Tsurayuki’s favor, not because this is fiction or because I’m an altruist, but because I really believe Kyoya will get caught in a pinch and be a good friend. Put that down though: the latter half of this episode is mostly about everyone’s overexerted and throws in a few gags as Team Kitayama struggles to stay conscious.

My only personal problem with Episode 6 is that it messes up my ship: I’m Kyoya x Eiko, and Episode 6 is clearly trying to get me on board the Kyoya x Aki train. But I’m not taking the bait, in large part because I’m still not charmed by Aki. If anything, I might be convinced to take a stroll down Kyoya x Nanako Lane, but … Eiko is where it’s at, even if she’s missing from this episode.

Overall, episode 6 is not a Haruhi-Insert song Episode, but it’s still pretty good. It’s always fun to spend some time with Team Kitayama: twice that as it looks like we’re getting more of Tsurayuki in Episode 7 and maybe even the start of an Aki arc. I expect a solid solution to Tsurayuki’s argument with his parents, and I hope that he and Kyoya will become even better friends. We get a feel for why he’s fighting, but I’d like to see things come full circle, come what may. Also, I look forward to these kids digging into the nitty-gritty of their video game production and maybe getting some sleep after planting their faces in a pile of clay.

Definitely a good episode to carry me through the week. I hope you feel the same way.

Make our life new! is streaming on
Crispy roll.

Analysis of the entire 2022 class of Jeremiah Alexander, Ty Simpson, and the Crimson Tide – The Athletic