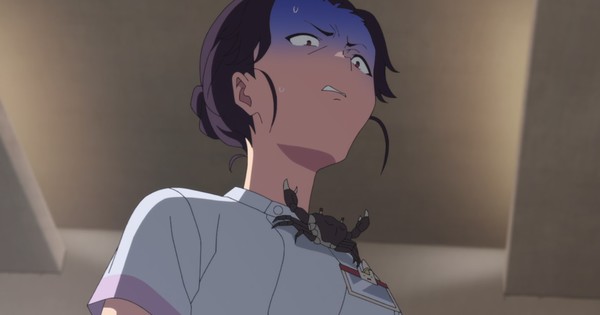 Episode 8 – The Aquatop on White Sand

There is something very charming about titles that are written in lowercase letters. I can’t tell you why, but it’s just that certain oomph, especially when it’s as hilariously alliterative as this week’s title. All of that to say that episode 8, “Crab Crisis,” had to be a good one, and believe me, this is it. (Including the scene where a crab crawls onto the head nurse’s chest; that scene is easily worth five stars in itself.)

After a really enjoyable beach episode last week, this episode starts with Fukka and Kukuru back at work and having a traveling aquarium to access Gama Gama. Think of book mobiles, but with garra rufa and a few sand dollars and starfish – tangible things that children can safely keep themselves occupied with. You get the point.

Oh, and explicitly no C-words are allowed in the context of this maritime traveling exhibition, or rather no crabs. And of course crabs appear after a while: that’s in the title. What follows is a lot of well-timed humor and crab-like antics (or could you say … noise?) Which are reinforced with Aquatop‘s special sound design and tempo.

One of the things I really enjoyed about this episode was seeing how the educational aspect of Gama Gama came back to the fore. I really like it when we see how skilled Kukuru and his crew are with the animals. It is a lovely reminder that skills are present at any age and Kukuru has skills for days. Aside from the weaknesses of this episode, it’s a solid argument as to why Gama Gama should continue to exist. The success of the touring aquarium has proven this: It is honestly a great strategy that gives children who cannot just get into the aquarium the opportunity to engage with a unique part of our global ecosystem.

Really, the events of Episode 8 cement a simple truth: Gama Gama isn’t just part of the community. It is a place of learning and healing within also the community and a place of immense friendliness and inspiration. It’s clear that everyone who visits loves it, and while I don’t think Gama Gama will end at the end of this story, part of me definitely remains concerned about the future of the aquarium. In many ways, my own concern for the future of Kukuru and Gama Gama mirrors that of Kai, who is still quite concerned about how she will deal with the impending closure of Gama Gama. It doesn’t appear right in this episode because of all the bang and other episode plot stuff, but it’s something I’ve been sticking with since last week. I’m sure there will be boomerangs again in the near future, especially since we only have a few weeks to go to the end cour.

But like I said, I believe in this series and I think it will tell a really thoughtful story that will never end Gama Gama. Also, I firmly believe that since Kukuru’s determination is stronger than ever by the end of this episode, Gama Gama will reappear in black … someday. It would be a real shame if this series ended without a significant aquatop, and I’m definitely in the middle of seeing that how surviving the trip to Gama Gama and staying open will play out. Hopefully there will be more crantics in it!

It feels like there’s a different dynamic in episode 8, which is nice: there are still no signs of magical realism, but I’ll start by putting that aside until it kicks in. I know I’ve kept asking for more in previous reviews, but I think I’ve finally come to terms with just letting Aquatope do it. If that means that the kijimuna (the little fish-eating god for reference) includes more later, then so be it. If not, it wouldn’t change that The aquatop on white sand is still a really good show for me. So much of the heart of this show lies in Fuuka and Kukuru and Kai and Kuuya and their entire community: that’s what ultimately makes me come back week after week.

We had a lot of fun with Episode 7 with a really remarkable backstory from Kuuya that I didn’t get into personally for last week’s review but still found valuable to what the series is trying to do with its characters as a whole. Episode 8, in turn, brings the show’s focus back to Kukuru by showing the importance of Gama Gama as the recipient of all her hard work and dedication. It’s an unexpectedly heavy element in an episode that I thought was going to be mostly a crab comedy, but … well, that’s just one of the many joys of Aquatop. I wholeheartedly expect everyone to lay the foundation stone Aquatop doing will pay off. It’s just a matter of meandering, which I am more than happy to do. In fact, I think this is the best way to experience Aquatop: Just take it one episode at a time with this really great cast of characters.

(But I’ll still be talking about Yuri and Fuukuru / Kukuuka almost weekly, so take care of that. You just took a break this week.)

All in all, Episode 8 really expanded on all of the previous episodes in a small, thoughtful way: I wasn’t expecting that because of the title, so I’m pretty pleasantly surprised. Crabs and lunatics aside, episode 8 is definitely a pick-me-up and suggests an even better episode 9 next week.

The aquatop on white sand is streaming on
Crispy roll.